The commodity supercycle is driving commodity prices to their multi-year high level. Whether it is iron ore, copper, aluminium, crude oil or even thermal coal, prices are soaring high. The demand for these commodities is expected to grow further in the second half of 2021. Industrial activities will be on the rise as a larger segment of the population would have been vaccinated and restrictions removed.

The rise in commodity prices also reflects on the share price performance of mining companies. This article will discuss the share price movement of three commodity behemoths listed on the ASX - BHP Group, Rio Tinto, and Fortescue Metals. 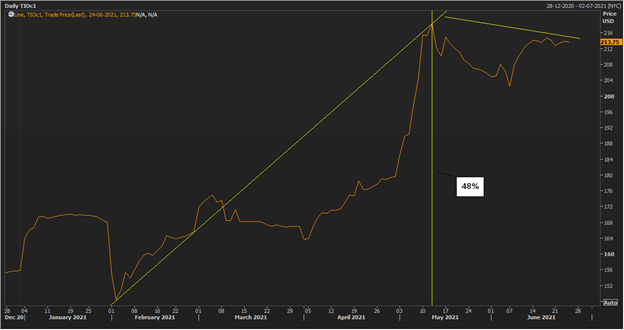 As can be seen in the iron ore price chart, the base metal price reached a high in May. It was the same period when the three mining giants considered here reached their all-time high, indicating that the commodity prices do impact the share price of the companies.

BHP Group (ASX:BHP) is engaged in exploring and producing a wide range of commodities. Iron ore, petroleum, copper, coal and nickel. All these commodities are in great demand, and prices are soaring.

BHP shares have performed at decent levels in the last decade, reaching an all-time high of AU$51.65 in May 2021. The Company has a market cap of AU$142.57 billion (as of 29 June) and pays a regular dividend to its shareholder. 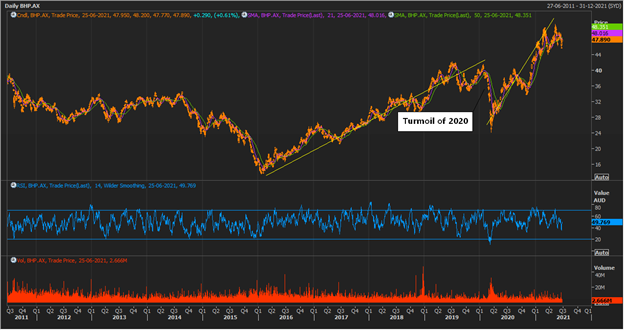 Fortescue Metal Group Limited (ASX:FMG) operates one of the largest iron ore projects in the Pilbara region of Australia. The Company is highly export-dependent, and most of its shipments are headed towards China. However, the recent massive demand for steel pushed the import of iron ore in China, and FMG was among the front runner in beneficiaries in the iron ore bull run.

Fortescue recently celebrated its 1.5 billion tonne iron ore shipped from its project. The Company has been a spectacular performer in the last three years. From AU$4 range, the share price reached a high of AU$26.02 in May 2021. 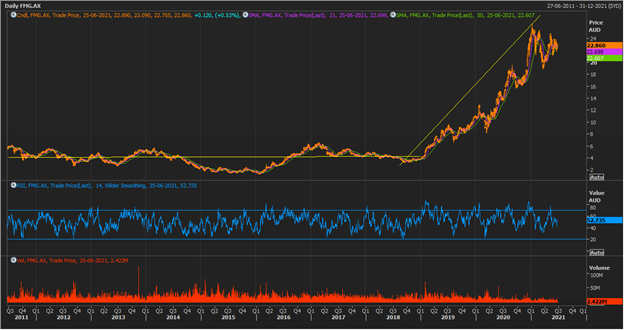 Brazil-based world’s largest iron-ore miner Vale S.A’s operations suffered several setbacks in 2020 when pandemic led to shutting down in operations followed by the disruption caused by tailings dam risks. However, Australian mining companies were quick to replace the supplies of Vale and fill the supply void.

The diversified heavyweight mineral explorer Rio Tinto (ASX:RIO), like its peers, made its lifetime high in May 2021 and reached A$132.95. The Company is active in base and precious metals, including iron, copper, aluminium, lithium, and boron. 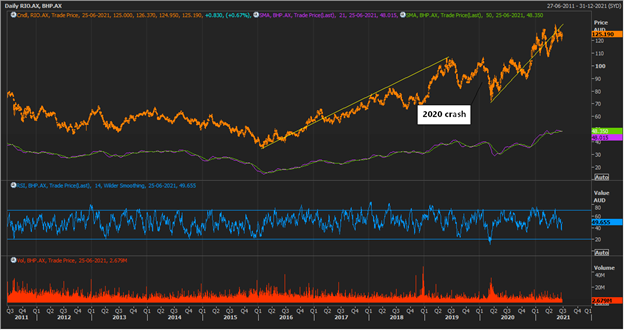 Suppose we do the comparative analysis of total returns to the shareholders in the last ten years (including dividends, bonus shares and every other instrument). In that case, we get a picture as shown below: 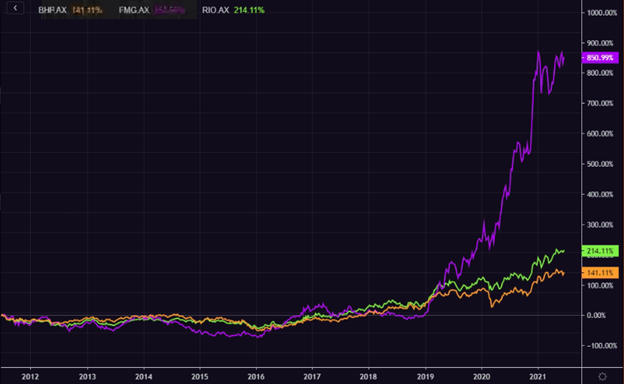 As we can see in terms of total returns, all three of them have given impressive results. However, FMG tops the chart with 850%.

The commodity supercycles usually last for three to four years. The current one has started during 2020, and it is anticipated to continue for some more time before the demand and price become flat.

INTERESTING READ: Why are iron ore prices volatile of late?