After delivering solid performance in the first two quarters of 2020, Variscan Mines Limited (ASX:VAR) has released another set of strong quarterly results. Variscan remained highly active and made substantial progress towards the development of its Spain-based Novales-Udias zinc project during the September quarter.

Over the period, the natural resources company completed a detailed mine survey and conducted rock chip and soil sampling at the Novales-Udias project. Additionally, the Company progressed with the collation of historic drill data to develop a detailed digital picture of the geology and the extent of mineralisation over the licence areas.

Let us quickly delve deeper into Variscan’s progress at its #Priority 1 project during the last quarter:

Variscan commenced a 3D laser survey of the San Jose – Novales underground mine in July this year. 3DMSI Limited was appointed to conduct the 3D laser survey, which arrived on site with its highly experienced team.

The survey, led by Dr. James Jobling-Purser, was targeted to gauge the extent of mine workings and identify in-situ and extensions of mineralisation. While the survey has been completed, the volumetric results are presently being processed. These results are likely to be released shortly and will be utilised to refine drill targets and test potential extensions and in-situ mineralisation.

In July 2020, Variscan unveiled high-grade rock chip sampling results carried out on multiple prospects within the Buenahora licence region of the Novales-Udias project.

In aggregate, 55 samples were analysed from 11 different prospects within the Company’s exploration permit, which supported the existence of in-situ high-grade mineralisation at all except 3 of the exploration prospects. The prospects that were sampled comprise LaRasa, Motilos, Pepita, San Jose, Jusfresno, Magdalena, Sofia, Pozo Plomo, Fortuna (Brincia), Esmeralda and Recce. 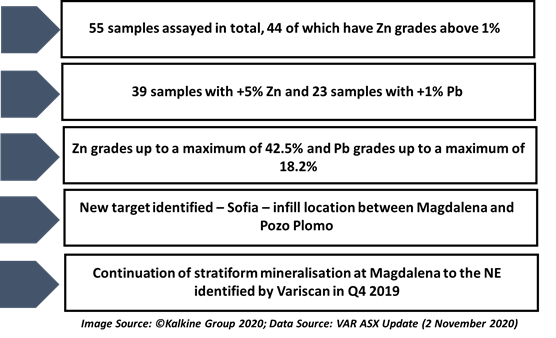 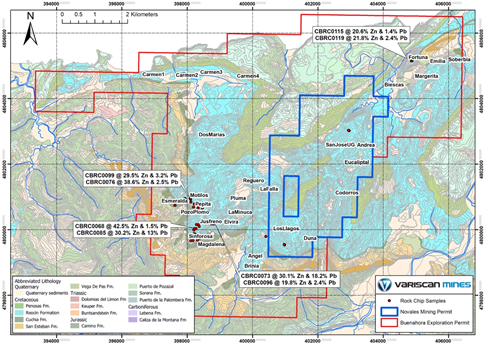 Variscan also conducted new infill geochemical soil sampling on prospects within the Buenahora licence region of the Novales-Udias Project. In aggregate, 379 samples were analysed from 4 different prospects. All these samples were indicating the surficial extent of in-situ superior stratiform mineralisation. 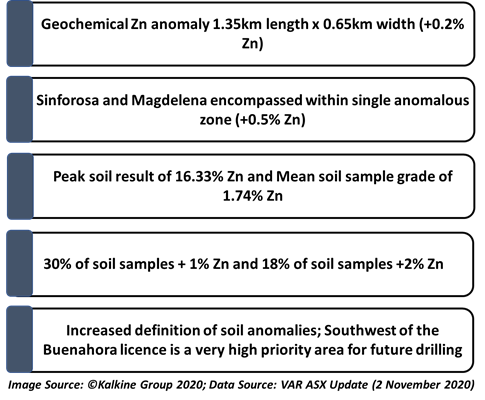 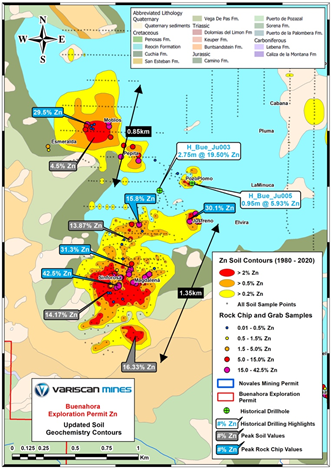 In August 2020, Variscan collated further 64 drillholes for 5,394m from the San Jose-Novales underground mine, and reported significant high-grade zinc intersects from additional drillholes:

During the quarter, Government of Cantabria granted the approval for carrying out underground drilling at the San Jose – Novales Mine. Variscan has already tendered the drilling programme and is completing the selection of local contractors to initiate the drilling campaign.

The Company notified that preparatory administration and logistics are well advanced to support the drilling program.

Variscan identified a 9km mineralised trend over the Novales-Udias project licence areas from modern and historical data. The mineralised trend represents a step change to the project with camp scale footprint discovered on trend with historic San Jose mine, about 10km from the world-class Reocín Mine (62Mt at 8.7%Zn, 1% Pb). 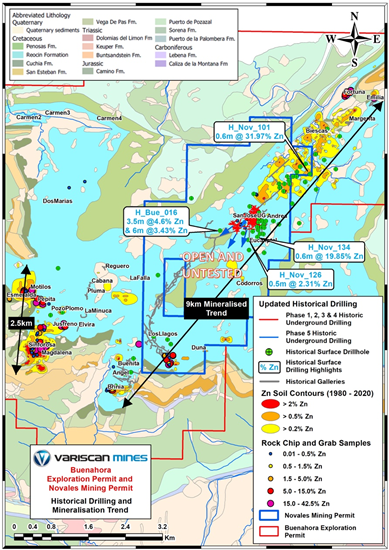 To Read More on These Exploration Results, Click Here!

Significantly, Variscan was also accepted as a member of the European Battery Alliance (EBA250) during the last quarter. The potential benefits of becoming an EBA250 member comprise access to European supranational and institutional funding like EIT InnoEnergy, industry insight and value-chain connectivity.

Read more about the European Battery Alliance at: https://www.eba250.com

Besides, the Company appointed Dr Susan Vearncombe as a Non-Executive Director in Q3 2020, who joined the board with extensive technical experience and deep understanding of the Spanish zinc projects.

On financial front, Variscan closed the quarter with a strong cash balance of $2.23 million as on 30 September 2020.