On 28 October 2020, Twenty Seven Co. Limited (ASX: TSC) announced the completion of acquisition of 100% interest in Oz Gold Group Pty Ltd. The acquisition is in line with the Binding Term Sheet (BTS) earlier announced on 11 September 2020.

The diversified metals explorer also released its activities report for the quarter ended 30 September 2020. The quarterly report highlighted the following major growth opportunities and activities pursued by the explorer-

Post the market announcements, TSC traded at $0.008 a share on 28 October 2020, registering an increase of more than 14% against the previous close with a market capitalisation of $11.95 million.

Oz Gold holds gold-copper projects in the mining friendly neighbourhoods of Western Australia and New South Wales. The rights include an exclusive option to acquire the Mt Dimer Project and the Yarbu Project.

The advanced Mt Dimer Gold Project is located in the Western Australia’s goldfields and includes a mining lease (M77/515) and an exploration licence E 77/2383. Field activities at the project have already begun with a site visit to conduct survey work, sampling and logistics in line with preparations for the upcoming initial drilling campaign.

To the vendors of Oz Gold, the company made a cash payment of $50,000 and issued 100 million fully paid ordinary shares. Over 50 million shares are subject to escrow for a period of 3 months and another 50 million for 6 months from their date of issue.

Exploration Programs at the Heart of September Quarter

During the quarter, Twenty Seven Co. focussed on its Rover Project where a RC drilling campaign was conducted to test four prospective areas. The drill holes intersected substantial gold mineralisation from surface at the Harmonic deposit within the project. 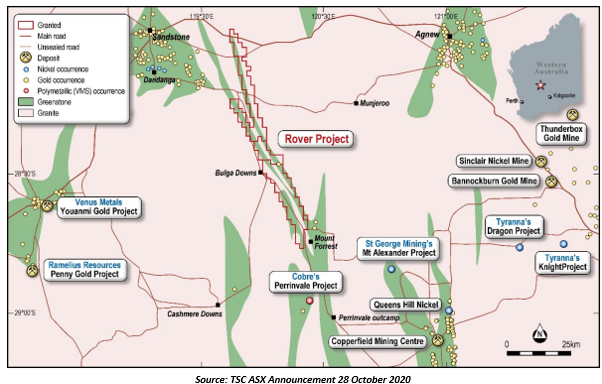 The company completed a 2,043-metre RC drill program to test new anomalous gold results as well as to follow up on the auger drill and soil geochemical programs concluded earlier during the quarter.

The four targets areas are-

Subsequent to the quarter, preliminary results for nine drill holes out of 13 drill holes at the Harmonic prospect were released. Broad intersections of gold mineralisation commencing from surface or near the surface were recorded in three drill holes:

The company raised $500,000 via a placement of 100 million shares at an issue price of $0.005 a share to professional and sophisticated investors. Further, one free unlisted option was offered for every two options subscribed for under the placement. The unlisted options will be exercisable at 1.5 cents each and would expire on 31 December 2022. The funds raised was meant for the payment for exercising the Oz Gold option and for general working capital purposes.

Subsequent to the quarter, the company received commitments worth $2.6 million through a 2-tranche placement of 433 million shares at $0.006 a share. On 13 October, the first tranche of shares (122 million shares) was issued. Further approval from the shareholders would be sought at the Annual General Meeting, which is planned for 20 November 2020, for the issue of the second tranche of the placement shares.