On 28 October 2020, Twenty Seven Co. had announced the completion of the acquisition of 100% stake in Oz Gold Group Pty Ltd and exercised an exclusive option to acquire 100% of the tenements from Cadre Resources Pty Ltd (“Cadre Option”). The completion of the tenement acquisition has followed the exercising of the Cadre option with a cash payment of $450,000 to Cadre Resources.

The premium Mt Dimer Gold Project is situated almost 200 kilometres of Southern Cross in the Western Australian goldfields. The Yarbu Project sits in the north-west of the Mt Dimer mining lease acquired by TSC. The Trident Au-Cu project is located 35 kilometres north-east of Broken Hill enhancing the Company’s foothold in the area surrounding Broken Hill as complemented by the Midas and Mundi-Mundi assets. 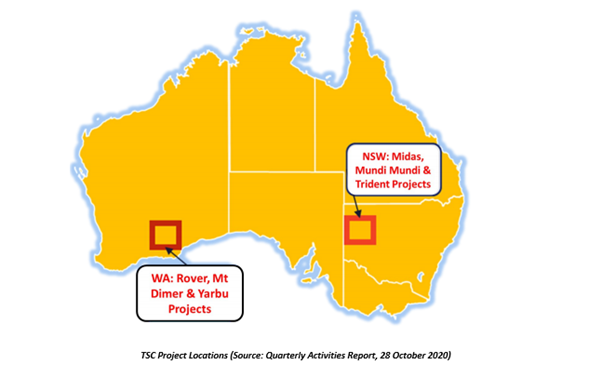 Yarbu Project: The Yarbu gold project is stationed in the Marda Greenstone belt, almost 80 kilometres northwest of the Mt Dimer Project. Yarbu is an exploration licence, which is highly prospective for Archean gold deposits.

Rover Project: The wholly owned Rover Project is positioned in the vicinity of Sandstone in the area prolific for gold and base metals in the region prospective for Archean greenstone belts. The project stretches over 460 square kilometres over two linear Archean greenstones along ~160 kilometres. Historically underexplored so far, the area is currently experiencing a surge in exploration activities.

The Trident Project is located almost 35 kilometres of Broken Hill and is considered highly prospective for IOCG.