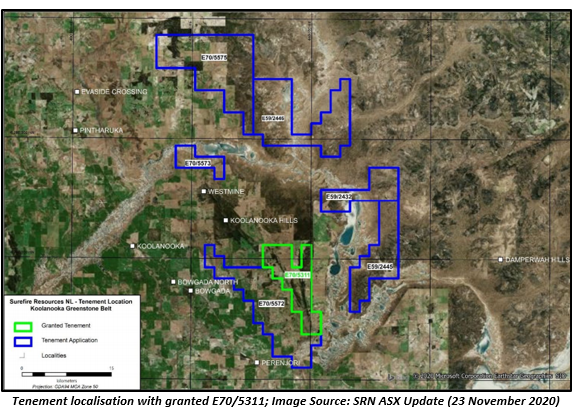 The granted tenement (E70/5311) is situated in the Koolanooka Greenstone Belt, approximately 16km northeast of the Perenjori town located in the Mid-West region of WA (Western Australia).

Moreover, the tenement area is deemed highly prospective for base metal and gold mineralisation with geological resemblances to the Golden Grove area.

The newly granted tenement encompasses the southern termination of a V-shaped greenstone structure, referred to as the Feral prospect. This prospect is well-defined geophysically, topographically and geologically by packages of BIF covered in metamorphosed volcanics.

Besides, the prospect has returned promising outcomes from Channel Sampling and Rock Chip Sampling, as specified below: 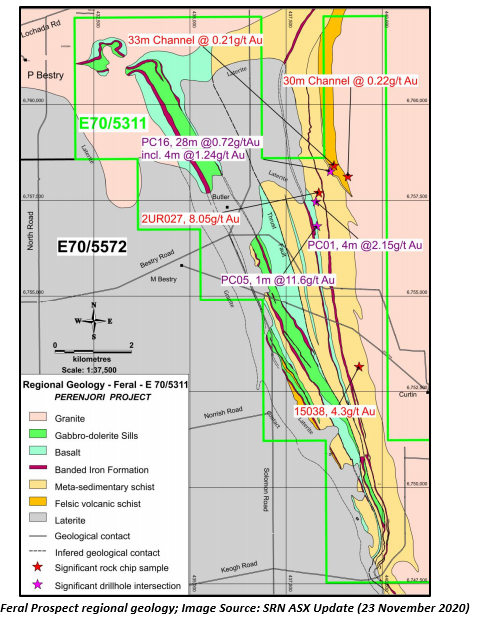 Surefire reported that the pending tenement (E59/2432) of the Maniws Gossan prospect has also returned favourable drill results, which comprise:

Recent work at the E70/5311 tenement has concentrated on the iron ore potential of the BIF units. While it remains a target, Surefire intends to focus on the gold and base metals potential in the future.

The Company will continue amassing the historical data before commencing on ground. Initially, the work will focus on validating and enhancing previously reported gold and base metal anomalies to rapidly move towards drilling at this impressive project.

The full review of the Perenjori Project is currently underway, which involves identification and ranking of targets. Drill testing of these targets is expected to commence as soon as historical data will be compiled and target further defined.