The resource drilling at Cayley Lode has intercepted one of the most significant copper mineralisation zones since its discovery.

The current hit on the copper mineralisation zone in the drill hole SMD104 from a shallow depth of 35m gave 144m at 1.04% Cu, 0.15g/t Au and 3.4g/t Ag. Resource drilling has been continued in 40m X 40m grid with currently available four drilling rigs.

Thursday’s Gossain has an extensive chalcocite-enriched zone occurring from the depth of 30m to 80m from the surface. The JORC 2012 inferred mineral resource is estimated to be 28 million tonnes at 0.4% copper. 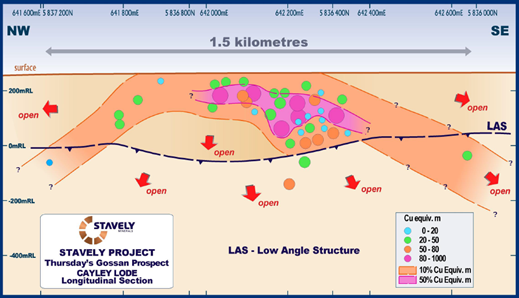 The Cayley Lode discovery mineralisation is defined over ~1.5km strike length to ~300m depth with an average thickness of 10-50m. The company is hopeful that drilling results along with the metallurgical work and geotechnical test work could lead to the Scoping Study for robust and reportable outcomes.