Iron ore and Gold explorer and developer, Shree Minerals Ltd. (ASX:SHH) released the activity report for the quarter ending on 30 September 2020. During the quarter, Shree continued on expanding its horizons in new prospective territories and advancing on the exploration and development at the existing gold and iron ore projects.

Shree Minerals lodged an application for an exploration licence (ELA6044) or Turondale project in the Eastern Lachlan Fold Belt. The Turondale project stretches over 129.9 km² in New South Wales and is considered highly prospective for porphyry, orogenic and skarn related gold mineralisation. 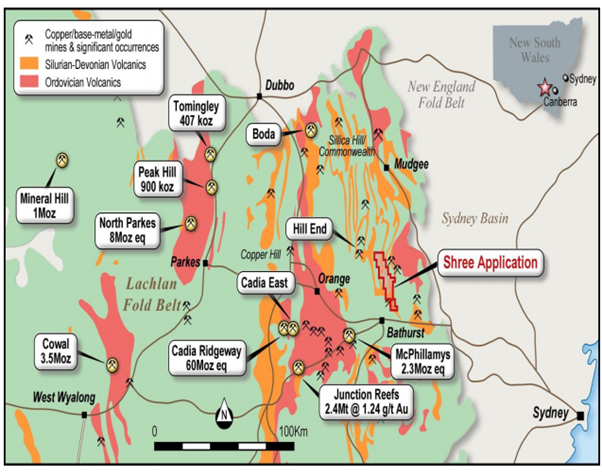 The ELA is surrounded by EL8942 and EL8940 exploration tenements hosting distinct north-trending reef systems, the Quartz Ridge and Box Ridge. The Quartz Ridge reef system hosts high grade gold anomalies with grades up to 1.535 kgs/tonne gold and substantial gold prospects up to 10 metres at a grade of 1.64 g/t gold from the surface to the end of the drill hole. The Box Hill trend expanses along 2.4 kilometres with gold grades up to 60 g/t gold during the rock chip sampling program. The 2 distinct reef systems are interpreted to extend into Shree’s Turondale project area.

The historical soil and stream sampling program by Nickel Mines resulted in anomalous results with grades up to 2.6 g/t gold, 3,700 ppm copper and 5,000 ppm lead. No further exploration program following up on the sampling program have been conducted.

An initial field exploration program was started to locate the extensions of the mineralised quartz veins and identify the extent and thickness of the soil cover blanketing the mineralisation. An extensive grid-based soil sampling program has been scheduled on a vehicle mounted auger rig and requires further approvals to commence.

The rock chip sampling program of the gossanous quartz veins by the Northern Territory Geological Survey (NTGS) returned assay grades up to 53 g/t gold. Shree minerals have already identified key prospective areas across the exploration licence. The field reconnaissance and sampling would be used to identify if the gossanous characteristics match with Bruce’s prospect. 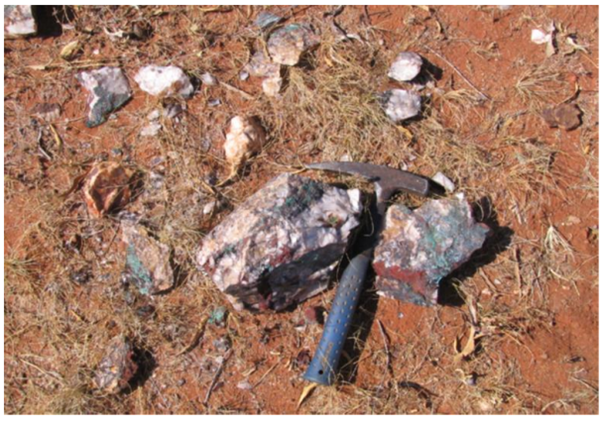 Shree has assessed that the mineralised quartz veins are extensive than earlier thought blanketed by a shallow soil cover. An auger drill program is anticipated to be more effective in identifying the extent of the veins undercover.

Additional reconnaissance geological mapping, rock chip sampling and soil sampling program have been planned to identify priority targets for drilling. A grid-based soil sampling program has been scheduled to assess areas with quartz veins. The outcomes of the orientation program would be utilised for the larger vehicle mounted auger to collect samples from a depth of 1-2 metres. The approvals from the NT Government Mining Compliance Group and Aboriginal Groups would be required for the auger drilling program.

Shree minerals propose to re-commence the mining operations at the Nelson Bay River Iron Ore Mine and seeks an environmental permit from the Tasmanian EPA. The Sumption of mining would commence at the existing DSO pit. The NBR product (DSO lump and fines) are well received and holds low amounts of impurities, including only 1.3% of alumina (Al2O3).

Presently, Shree is progressing on the follow up technical studies, modelling and engineering. Further, DPEMP is anticipated to be finalised in the upcoming months to advance to further stages of the approval process. The company anticipates being in a position to consider the resumption of the mining operations at NBR.

During the September quarter, Shree raised over $1.2M (before costs) via a share placement program. The directors at Shree minerals committed over $300,000 in the placement and awaits the shareholder’s approval at the general meeting planned on 30 September 2020.

*All financial information pertains to Australian Dollar unless stated otherwise.