Podium Minerals Limited (ASX:POD) has significantly extended the PGM Mineral Resource estimate for its Parks Reef project by 22%. As identified by modelling of recent drilling, POD’s mineral resource now stands at 1,390,000 ounces of combined platinum, palladium and gold plus base metal credits with 53,900 tonnes copper.

The previous resource estimate included three separate resource blocks in the western, central and eastern sectors of Parks Reef while this one includes results for around 1,870m of reverse circulation (RC) resource drilling in 17 holes from drilling undertaken during the September quarter.

Did you read: What’s fuelling Podium Minerals’ (ASX:POD) meteoric growth? Share price up 185% over past year

Interestingly, POD has constructed a new consolidated resources model that includes the complete extents of Parks Reef. This new modelling has had no substantial impact on the overall grade and tonnage of the previous resource estimates except some refinement of the geological domaining. This has facilitated for a clearer delineation of the high value PGM upper horizon.

Moreover, some new interpretations of faulting and associated felsic dykes within the mineralisation have been shown by the consolidated resource model and improved geological data.

Hunt For Rhodium Continues Along With Growth Strategy

As of now, there remains insufficient drill data to include rhodium into the Mineral Resources of POD; however, all drill holes tested have shown a concentration of rhodium within the lower PGM horizon. Moving forward, the Company plans to routinely assay for rhodium once they move to in-fill drilling for indicated resources. POD remains optimistic that this shall allow to include rhodium within the mineral resources for Parks Reef. With Rhodium prices soaring to new highs of US$16,500 per ounce, the company believes that it will add significantly to its overall basket price of contained metals. The company estimates it to be as much as 30%.

POD continues to advance its growth strategy for Parks Reef and has drilling currently underway in the eastern sector of Parks Reef with 2,500m and 3,000m of drilling expected to be completed before Christmas. The remaining of this drilling is expected to be undertaken in the Q1 2021 while initial samples from this drill programme have already been submitted to the laboratory. 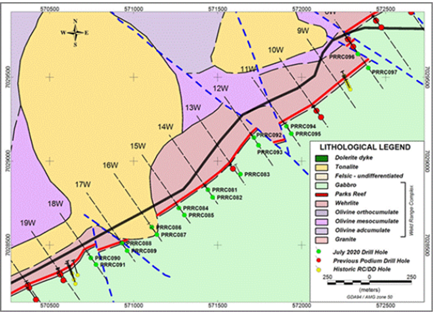 POD, through resource modelling, has also discovered targets for fault repetition of mineralisation within the existing resource areas and drill testing of these targets shall be incorporated into the progressing resource drilling programmes.

Besides the resource development work, POD is continuing with a metallurgical testwork programme through joint funding offered under the Innovation Connections programme of the Australian Government. The programme is aimed at selecting and optimising a leaching process to treat the oxide mineralisation in Parks Reef and is expected to run through the December 2020 quarter.

Currently, planning and assessment for additional metallurgical testwork is also underway for oxidised as well as fresh mineralisation as significant feed information into a scoping study.