Platina Resources Limited (ASX:PGM) is all set for a significant soil sampling and aircore drilling program at the Challa Gold Project in Western Australia during November 2020.

The plan follows promising results returned from the testing program conducted during October 2020. The proof of concept program has given a cost-effective solution to target more profound mineralisation within the tenements, according to Platina Managing Director Corey Nolan.

The testing program covered six orientation rock chip and 16 soil samples. The test results unveiled a wide zone of low-level gold anomalism in the transported soils surrounding the mineralised outcropping veins. This would aid the Company in targeting structures below the shallow transported cover across most of the tenement package.

Grades of 1.62g/t and 5.89 g/t were returned from two rock chip samples around veins systems known to be mineralised. A halo of low-level soil anomalism up to 1ppb parts per billion) surrounded the outcropping veins. Moreover, same gold anomalism was noticed elsewhere in the tenements over aeromagnetic anomalies.

In early October 2020, Platina Resources announced completion of the first reconnaissance field trip to the wholly owned gold project. While orientation rock chip and soil samples were collated, the logistical needs for the next major exploration phase were evaluated.

The Challa Gold Project is situated between the prolific gold districts of Sandstone and Mt Magnet in Western Australia. Stationed 500km north-east of Perth, the Challa Project tenements, E58/552 and E58/553, cover 293km2. 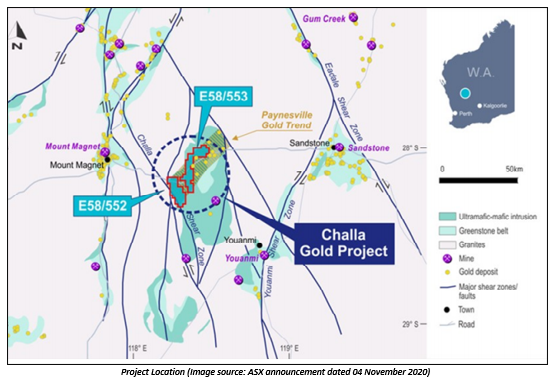 The Sandstone province is known for its gold yielding capacities. It has delivered more than 1.3 million ounces of gold from various underground and open-pit mining operations. Since its discovery in 1891, Mt Magnet has produced over 6 million ounces. The Youanmi Gold Mine located nearby has produced 670,000 ounces of gold throughout its lifetime. It is currently the target of new resource drilling of top-grade gold lodes.