Australian company Platina Resources Limited (ASX:PGM) has recently published its activities report for the September 2020 quarter. During the quarter, the company further advanced operational activities at its varying projects.

Platina Resources is inching closer towards the completion of a sale process with Canadian-listed Major Precious Metals Corp (CSE: SIZE). The transaction is for the Skaergaard Gold & PGM Project, which is located on the east coast of Greenland and is one of the world's largest undeveloped gold and palladium resources.

Its shareholding in Major will be subject to a 24-month time-release pooling arrangement, and the shares will be released in four equal tranches. These shares cannot be traded, assigned, pledged or transferred during the 24-month period. However, there are conditions defined under which shares could be released, such as changes in share distribution to the shareholders of PGM, corporate structure or share price performance.

Once the transaction is approved, PGM will get CAD 0.5 million in cash and 55 million Major shares, equivalent to CAD 16.3 million for PGM shareholders, based on the last traded price of CAD 0.28 cents per share.

After the deal completion, Platina will have the right to a board seat and become a significant shareholder in Major. On the other hand, Major will become a palladium-focused exploration and development entity.

Challa Gold Project is an exciting exploration asset including two exploration licences covering 293km2 in the prolific gold producing region of Western Australia. The project is stationed 500km north-east of Perth, in between the prolific Mt Magnet and Sandstone gold districts. 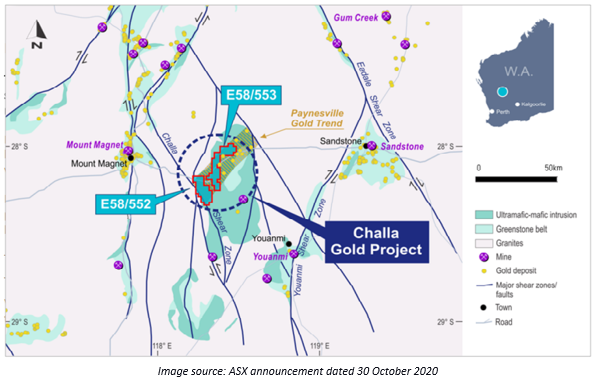 After successfully acquiring the project, PGM began its first exploration activities. Its geologists visited the site and collected various orientation rock chip and soil samples. They also assessed the logistical requirements for the next major phase of exploration. PGM is planning an extensive soil sampling and aircore drilling program in November 2020.

The project is at the centre of PGM's strategic focus on Australian gold provinces. The implementation of this strategy started in early June when PGM entered a conditional agreement to wholly acquire the Challa Gold Project.

The company has also applied for an exploration licence at Mt Narryer South, 580km north of Perth and 300km northwest of the Challa Gold Project.

Munni Munni is one of Australia's most significant platinum group metal and gold occurrences, located in the Pilbara region. PGM holds a 30 per cent interest in the project, which is operated by Artemis Resources Limited (ASX: ARV).

In the June 2020 quarter, an exploration and reverse circulation drilling program was completed at the project.

Also, PGM began proceedings against Artemis and its subsidiary Munni Munni Pty Ltd., considering that each of these parties breached the heads of agreement executed in 2015 after Artemis entered contractual arrangements with Empire Metals Limited and Almeera Ventures Limited. In April 2020, Artemis agreed to sell 51% of its 70% interest in the project to Empire Metals and Almeera Ventures, subject to various conditions.

Situated in central New South Wales, the Platina Scandium Project is one of the largest and highest-grade scandium deposits in the world.

PGM is actively working on a scandium off-take marketing program and targeting to secure production off-take agreements to enable project financing options for construction funding. The program is targeting customers across the US, Europe, Asia and Australia.

The second phase of metallurgical test work is planned to begin in November 2020 to examine whether scandium could be recovered using a solvent extraction process similar to that in use at titanium dioxide pigment plants to extract scandium from used acid.

Additionally, the company is evaluating the economic and technical viability of developing a battery materials processing plant that would produce nickel, cobalt, high purity alumina and scandium from ores.

PGM announced a non-brokered private placement for 22.36 million shares to gain AUD 894,400 (before costs) at AUD 0.04 per share in July 2020. Moreover, it issued 22.36 million free attaching options with a strike price of AUD 0.10 expiring on 16 October 2023 to the placement participants. Platina will use these funds for advancing its portfolio of assets.