Australia-based company Platina Resources Limited (ASX:PGM) has reiterated the intention of boosting its gold footprint in Australia as it released an investor presentation detailing its strategy and developments across its project portfolio.

The presentation was suitably titled “Going For Gold” and was released at the Noosa Mining Conference.

Platina Resources manages a portfolio of precious, speciality and base metal projects at several stages of development. The Company is focused on shareholder value generation by driving projects through exploration, feasibility and permitting towards development. Moreover, it is engaged in realising project value through sale, joint venture or development.

In line with its strategic focus directed towards Australian gold/PGM, given the record prices for gold and palladium in 2020, the Company has acquired new gold projects in Western Australia and is assessing gold M&A opportunities.

Challa Gold Project: The project sits in a prolific Western Australian gold producing district, where the Sandstone province, Mt Magnet and Youanmi mine have delivered 1.3 million, 6 million and 670,000 ounces of gold, respectively. The project with two exploration licences E58/552 and E58/553, covers an area of 293km2. The area with four processing mills nearby attracts strong corporate interest. 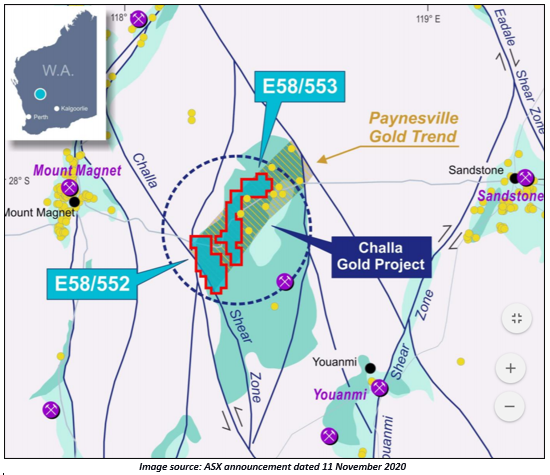 The project area has undergone minimal historical and recent exploration. The tenements are covered by shallow outcrop.

PGM is targeting significant gold deposits undercover. In Challa West, there is a massive structure associated with 1Moz Au deposits with favourable greenstone host rocks and hydrothermal alteration along zones of major structural dislocation. In Challa East, there is outcropping gold mineralisation and Paynesville gold trend with many gold workings and occurrences.

Aircore drilling and soil sampling is planned to begin later this month.

Mt Narryer Project: The project is located in the western Yilgarn Craton region and the tenement application (E09/242) covers 165km2. It has undergone minimum modern exploration due to lack of outcropping greenstones.

The structure covers an aeromagnetic high splaying off a significant fault, and the right rocks are located between sediments and Archean granites and gneisses. The project targets are analogous to the Julimar nickel-copper-PGE discovery 160km to the south.

A soil sampling program at the project has been planned once the Company secures the tenement.

A Glance At Platina Resources’ Other Projects

Skaergaard Project: The project’s sale process with Canadian-listed Major Precious Metals Corp (CSE: SIZE) is nearing completion. Once the transaction is complete, Platina's representative will join the board of Major. The sale will generate a value of AUD 15.1 million with CAD 0.5 million in cash and 55 million shares valued at CAD 13.75 million.

Munni Munni Project: It is PGM's 30 per cent owned project located in a well-established mining district, 100km from Karratha and 20km from Radio Hill processing plant. The project has a historical resource containing platinum, palladium, rhodium and gold. The robust metal prices in 2020 have created significant opportunities to realise value from the project.

Platina Scandium Project: PGM is exploring options to unlock value from the project. It is considering options to lower the capex and start at a smaller scale. Additionally, its hybrid nickel/cobalt strategy enhances opportunities to create value. Market development and offtake are critical to development funding.

Blue Moon Project: The Company is looking at options to realise value from the top-grade zinc-copper-gold deposit holding vital resource expansion and development potential. However, exploration activities are on hold due to the ongoing COVID-19 impacts.