A winning streak continues to excite the exploration journey of Pacifico Minerals Limited (ASX: PMY) as it successfully checks out of the September 2020 quarter. The Company reported significant developments at its Sorby Hills Joint Venture Project in its Q3 2020 Quarterly Update released on 19 October. The project is located in Western Australia’s Kimberley region and is the largest undeveloped, near-surface Lead-Silver-Zinc deposit present in Australia.

Notably, the project is jointly held by Pacifico (75%) and Henan Yuguang Gold and Lead Co. Ltd (25%). Its proximity to existing infrastructure and advanced permitting allows for fast-tracked production.

Release of the Optimised Pre-Feasibility Study

The results of the Optimised Pre-Feasibility Study on the Sorby Hills Project have strengthened Pacifico’s conviction to develop the deposit into a profitable mine. Significantly, detailed test work and growing Lead and Silver demand as part of the global clean energy transition underpinned the PFS. The PFS confirmed technical and economic attractiveness of the project.

A Glimpse at Technical Highlights

The PFS has indicated an average production of 50kt Lead and 1.5Moz of Silver, including a high quality 62% Lead concentrate product. Significantly, 14.8Mt of ore would be mined and processed from four deposits at a rate of 1.5Mt/annum over an initial mine life of 10-years.

Annual average production of 50kt Lead and 1.5Moz of Silver from mining and processing of 14.8Mt of ore from four deposits at a rate of 1.5Mt/annum over an initial mine life of 10-years in a high quality 62% Lead concentrate product.

The Company has included a Dense Media Separator (‘DMS’) within the process circuit and incorporated a near-mine Resources into the Project Mine Plan. Additionally, highly prospective ‘Eight Mile Creek’ tenement (E80/5317) has offered exploration upside to the project. This together with DMS and near-mine resources offers further significant expansion and exploration upside potential to the Base Case. 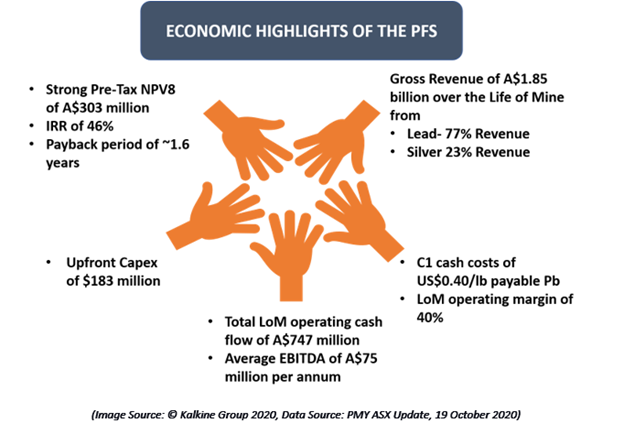 Pacifico Minerals also announced a maiden Ore Reserve for the Sorby Hills Project. Based on the economic evaluation, ‘Measured’ and ‘Indicated’ Mineral Resources were converted to ‘Proved’ and ‘Probable’ Ore Reserves respectively, while ‘Inferred’ material was treated as waste.

92% of the PFS Mine plan was underpinned by the stated Ore Reserves, providing a strong basis for Project development and attracting Project financing.

The latest drilling program is geared towards supporting the Sorby Hills Project’s advancement towards a DFS, while exploring opportunities to expand the resources at the same time. Under the project, a 5,200m drilling program across a total of 68 drill holes is planned at Sorby Hills. The program is expected to use a combination of mud-rotary collars and HQ3 diamond core. Positive results during its implementation will underpin the program expansion.

Approximately half of the planned drilling is centred on Resource expansion and exciting exploration targets close to the existing deposits. At the same time, the remaining half is assigned to metallurgical and geotechnical/sterilisation test work.

Exploration has also commenced at Eight Mile Creek, stationed southwards of the Sorby Hills Project. The site’s first path assessment includes reconnaissance geological traverse mapping along with gravity survey undertaken over the property’s northern half for building a structural interpretation of the Devonian-Carboniferous strata. Notably, the Company wholly acquired new strategic exploration tenement in April 2020, offering the potential to become a new mining district for Pacifico.

The Company’s balance sheet has been substantially strengthened by the recent capital raise, which offers full funding for Decision to Mine. At the end of the Quarter, Pacifico’s consolidated cash balance was ~$11.7 million.

The Company completed $10 million Placement, supported by quality institutional and strategic shareholder. In addition, there was a capital raise of $240,000 through a Share Purchase Plan. Both involved issuing shares at an issue price of $0.018 per share. The issue price represented a 12% discount to VWAP over the last five days before the trading halt.

Pacifico also engaged with Australian Federal Government organization NAIF with regard to the debt financing for developing Sorby Hills. NAIF has debt finance of around $5 billion lent on concessional terms, supporting infrastructure development inclined towards public benefit for Northern Australia.

Sorby Hills has passed through Stage 1 and Stage 2 of NAIF’s four-stage assessment process and is currently within Due Diligence Stage. BurnVoir Corporate Finance has been engaged as a financial advisor by the Company eyeing to obtain project finance for developing Sorby Hills.

Way Forward for the Company

Pacifico plans on advancing as well as de-risking the Sorby Hills Project before its Decision to Mine, slated for H2 CY2021.

Initial results from the DFS drilling campaign is anticipated during the upcoming Quarter. 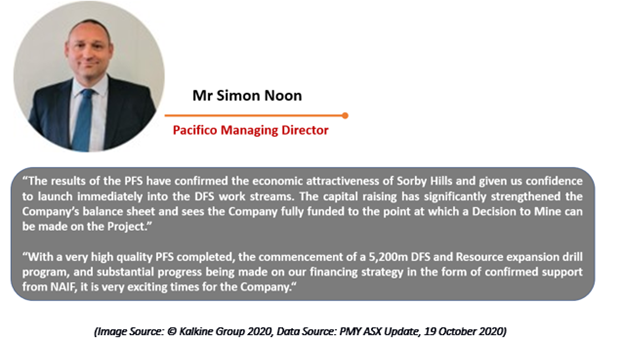