Pacifico Minerals (ASX:PMY) Chalks Out Another Victory with the Completion of Phase IV Drilling at Sorby Hills

Australian battery commodity explorer, Pacifico Minerals Limited (ASX: PMY) is all geared up to set sail for another exciting exploration endeavours. The Company has announced the successful completion of Phase IV Drilling Program at Sorby Hills Project. The Lead-Silver-Zinc project is situated in the Kimberley region of the most attractive mining jurisdiction of Western Australia.

Pacifico shares traded at $0.019 on 20 November 2020. The share price has edged up to more than three-folds in the past six months.

Preliminary observations from brown-fields exploration drill holes and the assay results received till date from the phase IV drilling are highly encouraging. Significantly, the project hosts two critical commodities- Lead and Silver, both of which are witnessing tremendous potential as the world’s attention shift towards a green economy.

Pacifico apportioned the bulk of drilling meters (3,340m) to these objectives, while the balance of the drilling was targeted at Resource extensions and brownfields exploration (~1,460m).

The geotechnical drilling consisted of 12 diamond drill holes for 1,224m, with all the holes field assessed by ENTECH Mining Consultants. A majority of the holes were drilled in the Norton Deposit area. The new mineralisation was intersected across several drill holes immediately adjacent to the current open pit designs.

Into the southern portion of the Omega deposit, drill holes SHDD039, SHDD043 and SHDD046 were drilled. Each hole intersected significant widths of observed mineralisation, lying beyond the current interpreted boundary of the Sorby Hills deposit. 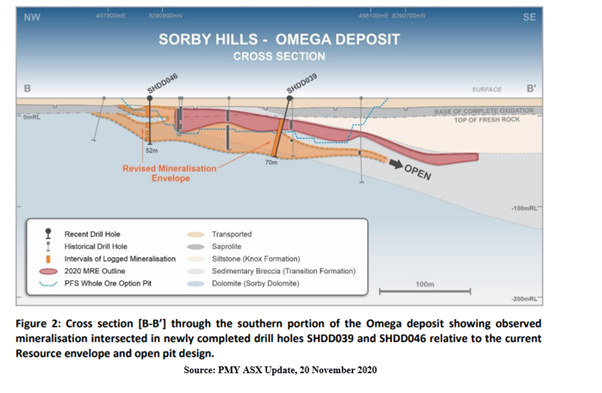 Drill Hole SHDD043- Drilled toward the southeastern limit of the Omega deposit, it intersected two observed mineralisation intervals. Ore body continuity down-dip of the current open pit design has been confirmed by the drill hole, which also indicates a broader mineralisation zone than has earlier been modelled in the area.

Drill hole SHDD030- An interval of intermittently visible mineralisation was intersected from 43m downhole SHDD030 over about 20m. If strong assay results confirm the preliminary observations of drill hole SHDD030, it is expected to impact the pit design at B Deposit substantially.

Lens through the Gravity Surveys

Haines Gravity was commissioned by Pacifico for conducting two new gravity surveys along with the Phase IV Drilling Program. 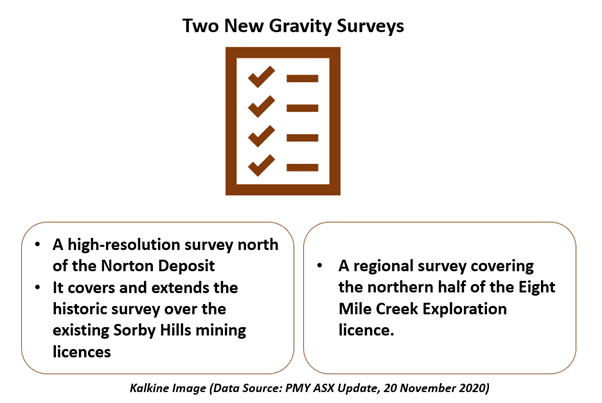 The gravity survey has been completed over the northern half of the Company’s 100% owned Eight Mile Creek. The data received has been submitted for interpretation by a geophysicist. Pacifico expects that it will facilitate a structural interpretation of the Devonian-Carboniferous strata while also expected to provide a first pass exploration concept.