ASX-listed gold explorer Matador Mining Limited (ASX:MZZ) has been focusing on the strategy to discover enough mineral resource to support the proposed production rates of ~100,000 ounces gold a year over the initial 10 years of life of mine at the Cape Ray gold project.

The company organised its Annual General Meeting on 18 November 2020 during which Chairman Ian Murray highlighted the achievements and the goals set for Matador.

The Chairman further stated that the existing mineral resource of 837,000 ounces of gold at 2 g/t Au and a successful scoping study highlight a possible initial economic mine life of 7 years with strong potential to generate economic returns.

Recently, drilling of 4,200 metres from the planned 10,000-metre drilling campaign has been completed. The assay results for 14 holes are being analysed at the laboratory, while the results for the received samples are highly encouraging. 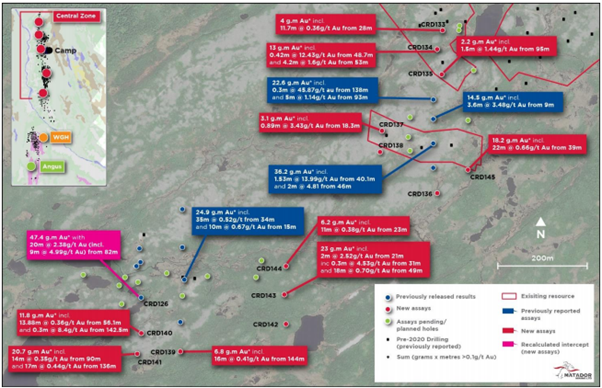 The recent Angus discovery is one of the first greenfield discoveries in the last 20 years. The intersections at Angus revealed a third kind of mineralisation on the project. The drilling at Angus has expanded the mineralised footprint to at least 400 x 300 metres.

The ongoing drilling campaign has also extended the brownfield Window Glass Hill to the south-west from the existing prospect boundary.

Matador has planned 16 holes on the prospect to extend the mineral resource base. The reported Inferred Mineral Resource of the prospect is 60koz with a grade of 2.4 g/t Au.

Strengthening Board and Management Team

Mr Ian Murray joined the Board in May, and subsequently Justin Osborne, Mick Wilkes and Nicole Adshead-Bell joined the team as Non-Executive Directors. Their expertise in the exploration and development of gold assets in different geographies has enhanced the board capabilities and envisions to lead Matador towards gold production in the future.

Matador has appointed Warren Potma, an expert in greenfield exploration discovery, as its new Exploration Manager. Mr Potma, in his short stint at Matador, has channelised the exploration activities to expand the mineral resource base.

Well-Funded for the 2021 Exploration Season

Matador has successfully raised $8.7 million to support its ongoing exploration activities at the Cape Ray project. The funds were raised via a placement involving the issue of 21.4 million shares at a price of $0.405 per share.

The shares were issued at a premium of 44.5% to the 15-day VWAP during the month of July this year. Matador is one of the first companies in Australia to achieve such a tremendous feat by completing such a placement. The company expects to be fully funded for the 2021 exploration season.

Matador has been successful in consolidating largest continuous landholding along the Cape Ray Shear which remains untested in majority areas, and with the funding and team in place Matador would continue to deliver values for the shareholders.