Mineral exploration firm, Jindalee Resources Limited (ASX:JRL) is in the process of developing two significant lithium sediment projects in the United States (US), including the McDermitt project and the Clayton North project. Jindalee believes that the US is an ideal location to develop lithium projects as the nation produces just ~1.2 per cent of the world’s lithium and substantially relies on imported lithium.

To Know More About Jindalee’s US Lithium Projects, Click Here

Over the past several years, lithium has been at the vanguard of numerous significant technological changes, particularly the shift towards electric vehicles (EVs). Burgeoning demand for EVs has been stimulating the demand for lithium-ion batteries across the world, primarily in countries reliant on imported lithium.

According to Jindalee, demand for lithium is likely to improve 10-fold over the next 10 years, backed by the growing demand for lithium-ion batteries in EVs. The Company is tapping this lucrative market opportunity via its high-grade McDermitt project, which has the potential to become one of the largest deposits of lithium in the US.

US Reliance on Imported Lithium

In the US, demand for lithium-ion batteries is primarily met by imported material. Nevada-based Silver Peak mine is the only operational manufacturing facility in the nation. 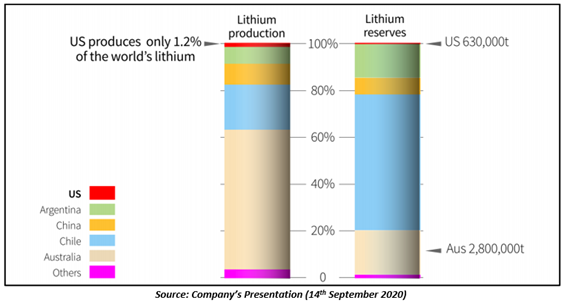 As per Mineral Commodity Summaries released by the U.S. Geological Survey (USGS) in January 2020, the only lithium production in the US was from a brine operation in Nevada in 2019.

It is worth noting that the global consumption of lithium was lower than anticipated in 2019, with China withdrawing subsidies on EVs, consumers cutting lithium inventories, and lower EV sales volumes.

McDermitt Project to Make US Self-Sufficient in Lithium

Jindalee believes that the advancement of its high-grade McDermitt project can make the US self-sufficient in lithium. Stationed in southeastern Oregon, the project was pegged by the Company two years ago following a comprehensive search across the western region of the country.

Good Read: Get Acquainted with Exploration Player, Jindalee and its Robust Project Portfolio

Further exploration performed by the Company demonstrated sediments rich in lithium of a maximum thickness of 165m, exhibiting excellent continuity over kms of strike. Subsequent exploration enabled the Company to announce a significant Exploration Target Range (ETR) and maiden Inferred Mineral Resource at the project in 2019, as indicated in the below table:

Moreover, the metallurgical testwork conducted at the McDermitt project so far has been very promising, indicating:

Jindalee is in the process of undertaking further metallurgical testwork at McDermitt to advance and de-risk the project. Besides, the Company has planned to conduct a 21-hole drilling campaign at the project to increase the existing ETR and Inferred Mineral Resource, and convert Inferred resources to Indicated classification, ahead of a potential Scoping Study.

The drilling program is expected to kick-start in October, for which the Company has already received positive feedback from the Bureau of Land Management (BLM).

Must Read: Jindalee to Raise ~$1.85Mn to Accelerate Exploration and Development at Key Projects