Australian mineral explorer Jindalee Resources Limited (ASX:JRL) has recently published its activities report for the September 2020 quarter. The report highlights key activities undertaken by the Company at its US and Australia-based projects during the past quarter.

Jindalee boasts a robust portfolio of projects in the US and Australia, prospective for lithium, iron ore, gold, nickel and magnesite. In the US, the Company owns 100 per cent interest in lithium sediment projects - Clayton North and McDermitt. Its key Australian projects comprise Widgiemooltha, Aries Diamond, Joyners, Leinster, and the Prospect Ridge deposit.

In the September 2020 quarter, Jindalee primarily progressed with the development of its McDermitt and Widgiemooltha projects. Let us quickly gaze through the Company’s last quarter developments below: 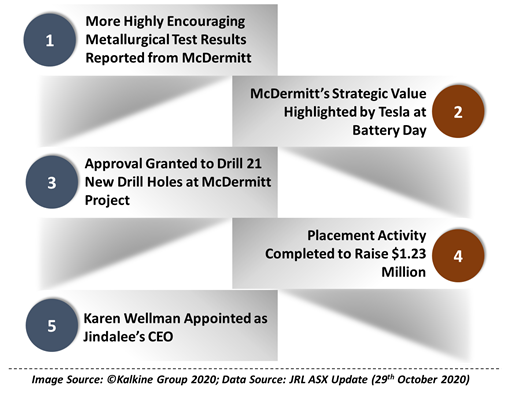 The results exhibited that attrition scrubbing at 20 per cent solids was able to:

The US automaker’s move highlighted the potential of these lithium deposits to provide long life and low-cost source of lithium to the nation’s electric vehicle (EV) battery market.

Importantly, the development of critical mineral projects including lithium, continues to obtain solid government support in the US. In September this year, the US President Donald Trump issued an Executive Order (EO) 13953 to address supply chain risks triggered by the nation’s dependence on critical mineral imports.

Later in the September quarter, Jindalee notified that the US Bureau of Land Management had granted approval for the planned drilling campaign at the McDermitt project.

The Company has successfully identified a suitable rig for the drilling program with drilling expected to begin early November.

During the quarter, Jindalee continued to expand on the substantial ground position established in the Widgiemooltha area of Western Australia (WA). The Company progressed with building on its holding, adding new tenement applications, and consolidating others at the Widgiemooltha project.

Jindalee’s Widgiemooltha project, located in WA goldfields south of Kalgoorlie, is prospective for gold, nickel and lithium. The Company has built a significant ground position in this premier mining district over the last three years.

The Company has submitted several Program of Works (PoW’s) to the DMIRS (Department of Mines, Industry Regulation and Safety) to approve drill testing of gold targets at the Widgiemooltha project. Drilling is anticipated to start at the project in the December quarter, conditional on rig availability.

In addition to these developments, Jindalee appointed Mrs Karen Wellman as the Chief Executive Officer, effective 12 October 2020. Mrs Wellman has around 20 years of experience in all aspects of the mining cycle, including resource definition, early-stage exploration and production across multiple deposits and commodities.

In addition, Jindalee completed a placement of 3.85 million shares at $0.32 to raise $1.23 million in September 2020 and at the same time unveiled an entitlement offer to raise a further $0.62 million.

The entitlement offer was successfully completed in October 2020, placing the Company in a strong position to progress with the development of the US and Australian projects.

The completion of the entitlement offer and the placement bolstered Jindalee’s issued capital to 44.7 million shares with cash and marketable securities of ~$3.93 million as of 30 September 2020, excluding $0.62 million raised from the entitlement offer. The mineral explorer appears to be in good stead to advance its existing projects and capitalise on new opportunities.