GTI Resources Limited (ASX:GTR), fast-tracking exploration at mineral tenements in Western Australia, has been under the spotlight amid the progress over aircore drilling program at its Niagara (Kookynie) Gold Project. The project is based in the central goldfields, Western Australia.

The Company recently concluded the aircore drilling campaign, targeting six of the eight significant gold soil anomalies that were discovered within E40/342.

Aircore drilling at the targeted geochemical anomalies has returned quartz that veins in multiple holes with intermittent pyrite. They are also associated as silicification and fracture fill.

The encouraging revelation of quartz in vein structures is likely to garner market attention which may continue until further details are disclosed by the Company in due course.

Currently, GTI Resources has stated that the relationship between quartz veins intersection and geochemical anomalies will be established after assay results have been obtained.

The Aircore drilling campaign is also providing guidance on the structure and lithology within the drilled areas. These areas include silicified faults, which adds to the structural interpretation.

Besides, the Aircore drilling was completed well ahead of schedule. 52 drill holes were drilled at an avg. depth of 45 m for 2321 m.

Notably, a robust pipeline awaits that is likely to propel further developments at the Project- 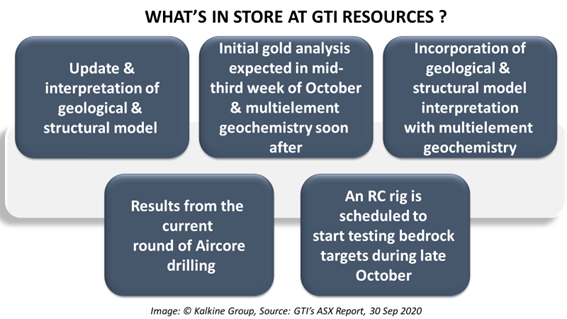 On 20 July 2020, the Company notified that is has been granted a 5-year extension of term for Kookynie exploration licence E40/0342 until 7 May 2025. Besides, GTI Resources is well-funded to conduct further exploration in the region, with circa $ 4 million available after recent capital raisings.

What makes EasyFi crypto so unique?

The Quadriga crypto fraud saga, and lessons for crypto investors