Perth-based gold and base metals explorer Golden State Mining Limited (ASX: GSM) is continuing to underline the exciting exploration potential at its wholly owned Yule Project. The Company, on 27 October, reported approval of a recent tenement application at the project in the Mallina Basin.

The Company meanwhile is also progressing its phase 2 reconnaissance drill program of up to 15,000m over six target areas at Yule South and Yule North.

The new exploration licence E47/4343 offers an extension of the Boodarie Greenstone Belt within the Sholl Shear Zone and provides an interpreted intrusive-style setting. The open file drilling data recorded only limited base-metal focussed historic drilling with the tenement. At the same time, Core Geophysics identified four targets, all of which are considered primarily prospective for gold. 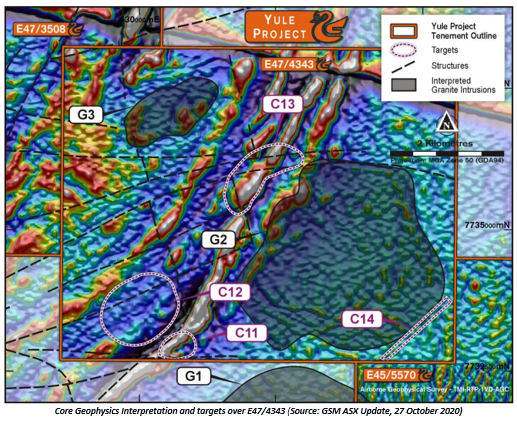 The target is an interpreted ultramafic unit exhibiting an apparent loss of magnetism because of structural modification or chemical alteration at a point of flexure.

The target is a broad zone of mostly non-magnetic stratigraphy that is mafics, felsics, volcaniclastics and sediments, close to a point of inflexion. The location between two interpreted granitic intrusives is regarded favourable for deformation and the accumulation of mobile fluids.

Zone of low stress caused by the intrusion of an interpreted granite pluton at its north-western margin. The area indicates dislocation of south-west trending shears of the Sholl Shear Zone that might favour deformation of dilatant brittle and subsequent mineralising fluids accumulation.

Golden State Mining has completed 106 holes for a total advance of 7,871 metres under the current drilling program. Drilling has been completed at three target areas, including Target 1 West at Yule South and Yule North’s Target 1 & 2. The Company expects assay results throughout December 2020.

ALSO READ: Golden State Mining – Spotlight on Success at the Yule Project in 2020