Perth-based gold and base metals explorer Golden State Mining Limited (ASX:GSM) is grabbing limelight for its recent exploration endeavours at the Yule Project in the Mallina Basin. The Company on 20 November 2020 announced the completion of the phase 2 air-core (AC) program at the project.

The consistent and successful exploration endeavours of GSM is making the Company one of the most active Mallina Basin explorers with a regional-scale ground holding.

Golden State Mining has successfully managed to complete the second phase of AC drilling at the project, covering 196 drill holes for a total advance of 15,125 metres, ahead of schedule. Six targets have been tested at the Yule Project including: 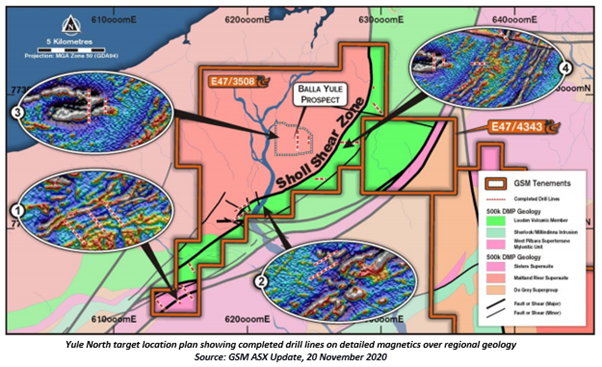 The focus of the Yule South drilling is on interpreted intrusive settings, situated on north-south and west-north-west structures. The drilling at Yule North is focused on some prospective zones along the Balla Yule Prospect and the Sholl Shear Zone.

With 199 holes drilled for a total advance of 13,275m, the phase 1 Yule South aircore drilling was completed over five gold target areas in mid-August 2020. Encouraging assay results were witnessed at Target 1, 2, 3 and 5.

GSM purchased an aeromagnetic dataset, which is expected to offer a significantly higher resolution for interpreting additional structurally hosted gold targets with a spotlight on intrusive environments.

GSM was recently granted an exploration licence application for the further prospective ground stationed eastward of the current tenement at Yule North. A strategic tenure has been added to the GSM Yule holdings through the exploration licence, covering a substantial section of the Sholl Shear Zone. The recently acquired aeromagnetic data has highlighted four more gold targets within the tenement, which the Company plans to investigate in 2021.

Golden State’s Managing Director Michael Moore stated that the Company is extremely pleased with the successful completion of another drilling phase without any incident. The phase 2 drilling was completed ahead of schedule and under budget, bringing the Company’s total drilling at Yule this year to 28,400m.

The drilling program to be undertaken in 2021 would be based on the results of the first two reconnaissance drill programs as the Company looks to further deploy its resources on its 700 square-kilometre tenement package located in the highly prospective Mallina Basin.

Follow-up RC drilling premised on the drill results from the phase 1, and potentially the phase 2 drilling will be required. GSM has also planned further reconnaissance AC over new target areas, defined after a recent review of geophysical data on newly granted and pending tenements. The Company is looking forward to the upcoming assay results anticipated to flow from November. The remaining assay results are expected to be released at regular intervals during December 2020.