Critical metals explorer, Corazon Mining Limited (ASX: CZN) announced that it has identified new  drill targets  for its next phase of drilling at the flagship Lynn Lake Ni-Cu-Co Sulphide Project in Manitoba province of Canada.

Corazon recently concluded a MobileMT geophysical survey at the Lynn Lake project in Canada identifying numerous anomalies with the potential for nickel-copper-cobalt sulphide mineralisation. The modern and advanced aerial geophysical technique has the potential to be a game-changer for exploring massive nickel sulphide mineralisation at Lynn Lake.

The preliminary interpretations of the geophysical data are focused on the highly prospective Fraser Lake Complex (FLC) within the Lynn Lake project area where the drilling campaign identified mineralisation with the potential of hosting a massive magmatic Ni-Cu-Co sulphide system. Numerous new conductors are located on trend from the Matrix trend within the Fraser Lake Complex.

The efficiency of the ground and aeromagnetic (EM) geophysical surveys previously conducted at the flagship Lynn Lake have been impacted by the surficial conductive lake deposits, barren sulphidic sediments and country rock xenoliths within the gabbroic intrusions. 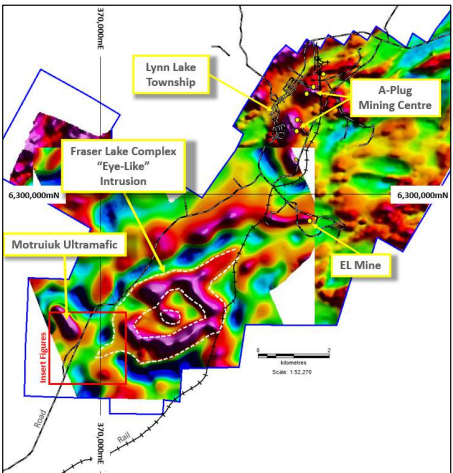 However, the MobileMT survey is effective at depth and is not affected by superficial conductors such as lake deposits. The resistivity and conductivity data sets along with other geophysical data targets massive nickel sulphide deposits.

New Priority Conductors – Corazon is focused on the ongoing exploration at the FLC area with the knowledge that the mineralisation was intersected during the historical drilling indicated the presence of a large and long-lived magmatic sulphide system. The centre of the mineralisation at the Fraser Lake Complex has been identified.

The MobileMT geophysical survey has possibly removed the conductive signature of several false EM conductors that had contaminated the FLC area. The new conductors at the FLC highlight the prospectivity of the western extremities of the intrusive complex which is possibly linked to multiple intrusive bodies.  The geological setting is prospective for massive sulphide deposits and the volume of the mineralised gabbro within the Matrix trend.

The MobileMT conductors identified are variable in the form with the “conductors of interest” and are prioritised on the basis of their intensity and coincidental anomalism for other geophysical properties.

The priority targets identified are interpreted as magma conduits between satellite mafic/ultramafic intrusions and the large “eye-like” Fraser Lake Complex within the Lynn Lake project area. Additionally, several new geophysical conductors are being analysed at the moment. Extensive planning for the upcoming drilling campaign is scheduled to commence by the year end, contingent on the pandemic restrictions in Canada.