During the recent quarter ended 30 September 2020, ERL had continued to post exceptional results from continued exploration efforts at the two projects.

During the September quarter, very encouraging results were received from this June 2020 RC program.  At depth and down plunge in the north-east sector of the Smith Well prospect, drilling has consistently intercepted copper-nickel mineralisation. Additionally, a previously unknown broad zone of elevated PGM mineralisation was encountered in hole YRC20-28 through drilling at YT01.

RC hole YRC20-28 at YT01 Prospect was drilled during June 2020 to test for depth extension to the copper-gold mineralisation encountered in previously drilled YRC20-14. Subsequently, ERL received encouraging results, especially with broad widths of Cu-Ni mineralisation and the presence of elevated palladium and platinum values seen towards the bottom of the hole.

The first broad intercept observed outside the Smith Well area is the 20m width of anomalous mineralisation averaging 0.39% Cu and 0.11% Ni from 143m.

For ERL, the area of interest lies in the highly anomalous palladium and platinum values associated with the copper and nickel towards the end of the drill hole. In YRC20-28,

Furthermore, the results from the 126 soil samples collected over the YT01 area in September are still pending, and ERL has planned

ERL intercepted strong sulphidic mineralisation containing chalcopyrite, pyrrhotite and pyrite of varying tenor through drilling during 2020 so far. Out of the further six RC holes completed at Smiths Well in June 2020, out of which:

Out of the four holes, holes YRC20-22 and YRC20-23 tested the upper and lower limits of the modelled DHEM plates in the north-eastern limb, where YRC20-22 intercepted

While these encouraging results offer a significant course of action for further drilling to assess the extents and depth of mineralisation, ERL believes there is a need for additional exploration for a definitive assessment.

At the Penny’s Gold project, ERL concluded a 22-hole 1,381m aircore (AC) drilling program in September 2020 that was designed to test the extent of gold mineralisation at the PF09 prospect. Subsequently, the samples were submitted for assay in Perth, the results to be received after the end of the quarter. 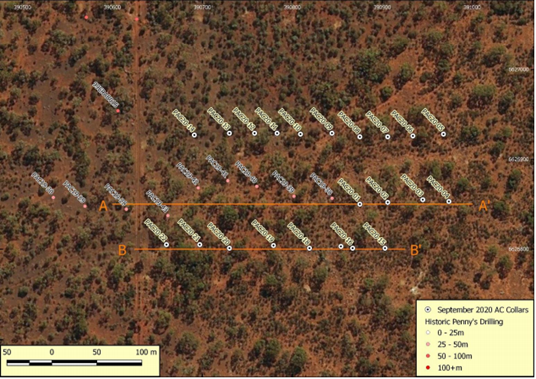 Continuously strong gold anomalism was returned through drilling from consecutive holes with peak gold results of 12m @ 0.80g/t Au from 40m, including 4m @ 1.78g/t Au from 48m in hole PAC20-02.

Further, broad zones of anomalous arsenic zones were also encountered and are of significance as nearby Penny’s Find and Garibaldi deposits are reported to show a strong correlation of gold with arsenic values.

ERL’s planned activities for Penny’s project area include a follow up drilling to test the consistency with the depth of gold mineralisation intersected in AC drilling and for multiple high priority gold targets within the project area.

Funding and Cash Position of ERL

During the quarter, ERL also undertook a placement to professional and sophisticated investors, under which around 108 million new shares were issued at a price of A$0.012 per share to raise approximately A$1.3 million before costs.

The placement received strong support from new as well as existing investors.