Opportunistically, ERL has identified several exploration targets across these projects that have excellent potential.

On 12 October 2020, ERL announced the rich results returned from the recent aircore drilling at PF09 prospect.

The Company’s exploration efforts at the Penny’s Gold Project have returned encouraging results for ERL. The recently concluded drill program (September 2020 drilling) comprising twenty-two aircore holes for 1,381m was completed over the PF09 Prospect (identified during AC drilling in November 2019).

The September 2020 drilling program tested this strongly anomalous prospect and extended the established mineralisation on section 6,626,850mN to a width of 250m.

Detailed Discussion at: Empire Resource’s Investment in NTM Gold Proves Lucrative, Grows From $0.0325 to ~$0.09 Within a Year

The results returned were characterised by strong gold anomalism from consecutive holes with pinnacle gold results of 12m @ 0.80g/t Au from 40m, including 4m @ 1.78g/t Au from 48m in hole PAC20-02.

Other broad drill intercepts of anomalous gold include the following: 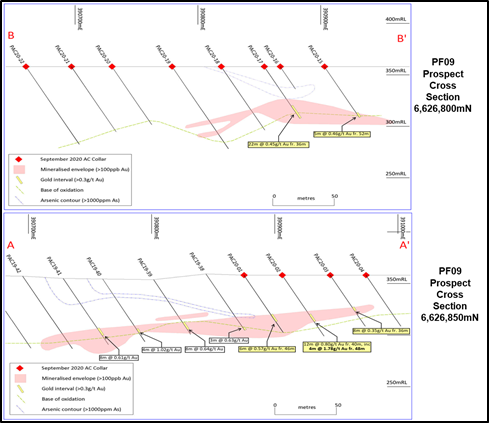 Furthermore, 22m @ 0.45g/t Au from 36m towards the end of the hole was returned from drilling on section 6,626,800mN and included 4m @ 0.74g/t Au from 44m in hole PAC20-17, which ended in relatively fresh mafic volcanics. Moreover, gold mineralisation is believed to be complemented by anomalous arsenic values at hole PAC20-17.

During the course of drilling, ERL also witnessed wide zones of anomalous arsenic up to 2,065ppm with nearby distinct gold mineralisation. ERL believes that these arsenic zones are of material eminence as nearby deposits, Penny’s Find and Garibaldi are described to demonstrate the robust correlation of gold, including arsenic values.

Presently, ERL has planned a follow-up RC drilling intending to test the consistency with a depth of gold mineralisation intersected in various aircore holes, including PAC20-01, PAC20-02, PAC20-12 and PAC20-17.

Overall, ERL shares a strong commitment towards developing a sustainable and profitable mineral business through seeking to extract value from direct exploration across its present projects. Beyond this, ERL is also engaged in establishing lucrative investment opportunities that align with its development objectives.

Can we reach an “age of immunity”? Aditxt pushes FDA for Covid-19 antibody tests

How high will BTT token go?

Is Walmart getting into Cryptocurrency, NFTs?