Eclipse Metals Mobilises Equipment Ahead of Drilling Program at Amamoor, Stock Up Over 14%

Multi-commodity explorer with major focus on the Northern Territory and Queensland, Eclipse Metals Limited (ASX:EPM) has announced the mobilisation of equipment for the upcoming second phase diamond drilling program at the Amamoor manganese deposits in Mary Valley Project near Gymphie in south-east Queensland.

The stock of the Company zoomed up by more than 14 per cent to $ 0.008 on 22 September 2020, post the significant market update. In the last six-month period, the stock has delivered a return of more than 133 per cent.

Post exploration surveys and initial phase of drilling in 2018, the Company has identified direct shipping ore (DSO) characteristics at the Amamoor manganese mineralisation.

The stage 2 of the planned drilling program is designed to test the width, depth, grades and chemical properties of the manganese mineralisation in proximity to historical high-grade mine workings at Amamoor that were also tested during the stage 1 drilling program.

The historical results indicate the potential for substantial manganese mineralisation both laterally and at depth with distributed dense gravity anomalies within or close to the known historical mine workings.

The drilling program is scheduled to commence in the historical mining area within the Central area, adjacent to the two best drill holes (ADD006 and ADD007) from the 2018 drilling program. Multiple drill holes have been planned to inspect extensions along the strike and at depth.

Drilling at the Northern historical workings that could not be accessed earlier during the 2018 drilling program will be tested after the Central area with possible drilling in the Southern workings, contingent on the outcomes of ground assessment. 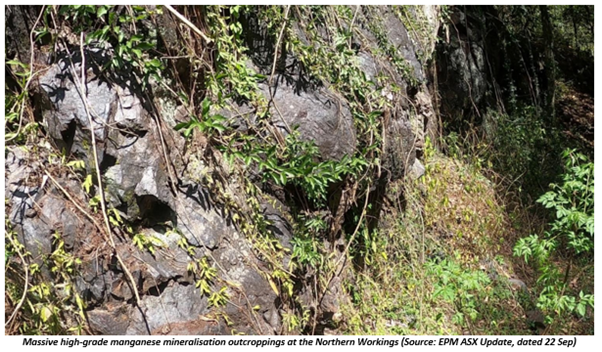 At the Northern workings, a potential significant body of mineralisation exists as a major outcropping of the manganese mineralisation with a height of 8 metres and a length of approximately 25 metres.

Manganese, a silvery grey metal, has been centre of the talks, primarily on the back of its growing application in battery packs. The metal has been commercially used by premier EV companies such as Tesla for nickel-manganese-cobalt (NMC) battery packs.

Presently, manganese is predominantly used in the manufacturing of steel, helping in reducing iron ore by removing oxygen and sulphur on the heating of iron ore. The metal is a crucial component in the alloying process and is responsible for bonding iron and other elements to produce various types of steel.

Manganese, as an alloying agent, reduces the brittleness of steel and enhances its strength. Additionally, the metal is used in alloys with other metals, including copper and aluminium.

A strong blend of both metallurgical and non-metallurgical applications including battery cathodes, soft ferrites in electronics, and micronutrients in fertilisers enhance the diverse manganese business streams. Resumption of industrial activity amid the ongoing pandemic situation and a long-term demand growth potential from the renewable energy segment bolster the market dynamics of manganese.

(All financial information pertains to Australian currency unless stated otherwise.)