A second diamond drilling campaign tested the extensions of previously drilled high-grade manganese mineralisation along the strike length of 160 metres and down dip to 20 metres. Six diamond drill holes were completed for 97.6 metres.

Half coring samples from the prospective and mineralised zones have been analysed at the Brisbane based laboratory.

The assay results and the geological interpretation based on the latest and previous drilling programs indicate the potential for large-scale, low-grade mining of manganese ores to provide the feed for a processing plant to produce a high-grade marketable product.

The exploration tenement (EL27584) covers the Devil’s Elbow U-Au-Pd prospect in the Northern Territory. The licence was awarded in May 2020 to Eclipse Metals’ wholly owned subsidiary North Minerals Pty Ltd by the Department of Primary Industry and Resources.

In the project area, Uranerz Australia was the first to discover and explore the uranium, gold and palladium mineralisation. Later, Cameco Australia explored the Devil’s Elbow, primarily to the north of the Ranger Fault, between 2002 and 2008.

In July this year, a preliminary helicopter-borne reconnaissance visit was conducted to assess the logistics requirements and access to the project site. Planning for field exploration after the NT wet season is underway. Given the increased interest in precious and platinum group metals coupled with the recent rally in demand and price of U3O8, timely exploration program at the Devil’s Elbow tenement cannot be ruled out.

Must Read: Eclipse Metals Mobilises Equipment Ahead of Drilling Program at Amamoor

The exploration program will focus on the areas surrounding the Devil’s Elbow, Terrace and Ferricrete uranium projects, targeting the priority areas defined by historical radiometric and geochemical anomalies within the licence and comparatively unexplored space south of the Ranger Fault.

The cleaning and assessment of geophysical data of the tenement and the surrounding areas are underway to have a better understanding of the structural, geophysical and geological context of the high-grade uranium, gold and palladium mineralised assays.

So far, the results are in favour of the Devil’s Elbow prospects, enabling Eclipse Metals to define and prioritise 17 drill targets zones on the basis of the integrated geophysical products.

The Devil’s Elbow prospects display strong similarities with the iconic Jabiluka uranium and gold mine, which was discovered in 1971 following-up on a low order anomaly from the ground radiometric survey. The uranium and gold mineralisation occurs within the alterations of the Cahill formations, in proximity to reverse faulting structures displaying strong similarities to the Devil’s Elbow prospect. 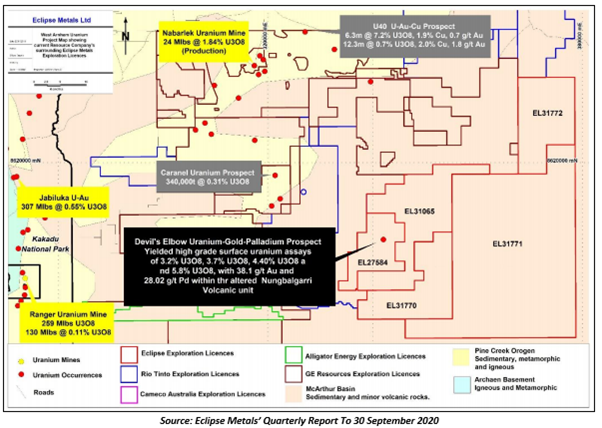 Eclipse Metals has identified several new, untested targets in the anomalous structural zones to the south of the Ranger Fault based on the collated exploration results.

The drilling campaign will target the uranium/vanadium bearing paleochannels from the 2019 geophysical gravity survey at the licence EL24808. The Ngalia Basin hosts high-grade vanadium deposits including Bigrlyi, Capper and Napperby Project.

Currently, Eclipse Metals is preparing a submission to the NT Department of Primary Industry and Resources and the Central Land Council to grant the tenements ELA24623 (Eclipse) and ELA26487 (Yuendi).

Upon review of the submission, the council would consult the Traditional Landowners to consider assistance with initial meetings by Eclipse Metals to commence negotiations. The tenement application for ELAs 32077, 32078, 32079, 32499, 32500, 32501 and 32502 are advancing via normal channels.

Historical exploration at the tenement application ELA26487 (Yuendi) has indicated the presence of anomalous base metal grades in the Rock Hill Copper Field, which includes historical mining centres and polymetallic veins. Over 10 copper prospects at the Yuendi tenement remain relatively unexplored. The copper deposits in the Mt Hardy Mineral Field were discovered in 1935 where the quartz reefs and pegmatite-aplite veins were reported within the Lower Proterozoic schist.

Once these licence applications are granted, planning for extensive exploration programs including geological mapping, geophysical surveys, sampling and drilling program will commence.

Board Appointment - Pedro Kastellorizos was appointed as a Non-Executive Director to the Eclipse Board on 1 July 2020.

Mr Kastellorizos comes with a rich 22-year experience as a geologist working with multi-commodity exploration, geological interpretation, underground mining, tenement trading and corporate management. He holds extensive knowledge of the Northern Territory and has strong local network and contacts.