The coronavirus pandemic took commodity markets by surprise early in 2020, destroying demand for even the largest commodity, crude oil. The demand for most commodities slumped within weeks due to restricted industrial activity and the widespread lockdown measures.

Despite the cataclysmic impacts, the virus outbreak proved to be an accidental trigger for critical commodities, on the back of trillions of dollars in stimulus and the unequivocal support for clean energy and energy storage.

While the global economy weakened, investors switched to the safe-haven assets, including gold, which rose to the record levels of US$2,000 in early August this year.

Critical minerals, including manganese, have been one of the major benefactors of the anticipated long-term demand growth. Further, uranium prices have rebounded on the dismal thermal coal market environment and the ability of nuclear energy to present a cleaner and greener source for power in the future.

Australia-Focused Explorer with Mega Au, U and Mn Opportunities

Interestingly, both these themes are in complete consonance with Australian mineral exploration company Eclipse Metals Limited (ASX:EPM). The Company focuses on exploring Queensland and the Northern Territory for multi-commodity mineralisation. It holds an impressive portfolio of projects prospective for gold (Au), manganese (Mn), uranium (U) and base metals. 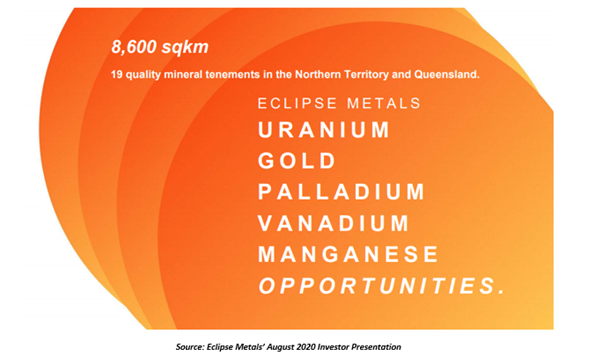 Eclipse Metals is committed towards creating wealth for its shareholders through long-term capital growth and ultimately, dividends. The explorer remains flexible on developing viable mineral deposits through sole ownership or partnership with other mining players.

Liverpool Project: EL 27584, including the Devil’s Elbow uranium-gold-palladium prospect at the Liverpool Project, was granted in May 2020. Subsequent to which, an initial helicopter-borne reconnaissance visit was conducted in July to make a preliminary evaluation of access and logistic requirements.

Eclipse Metals plans to commence field activities at the site following the wet season of the Northern Territory. The Company considers its ability to explore the Devil’s Elbow prospect timely, on the back of increasing interest and value in precious metals, and positive moves in the price and demand for uranium. 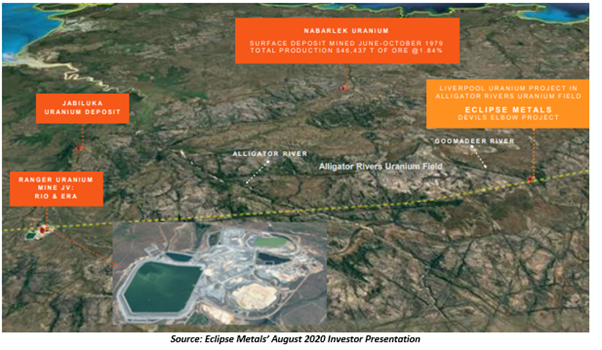 Ngalia Basin Project: An initial reconnaissance drilling has been proposed at EL24808 (Cusack’s Bore) and EL32080 (Ngalia North) tenements in the northern Ngalia Basin. The Company is seeking drilling rigs to commence the program at the uranium/vanadium-bearing paleochannels indicated from the 2019 geophysical gravity survey at EL24808.