Continuity Of Base Metal And Rhodium Enrichment Witnessed In Drilled Areas

POD has concluded multi-element assays for all the drill holes. These assays have shown consistency in the dominantly copper enriched base metal horizon in the hanging wall above the main PGM horizon. 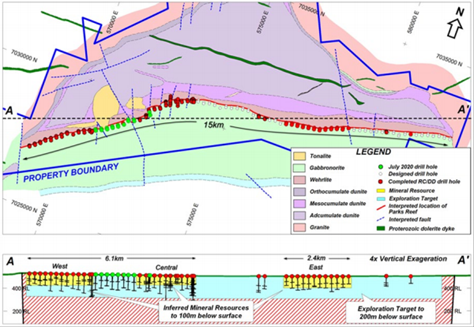 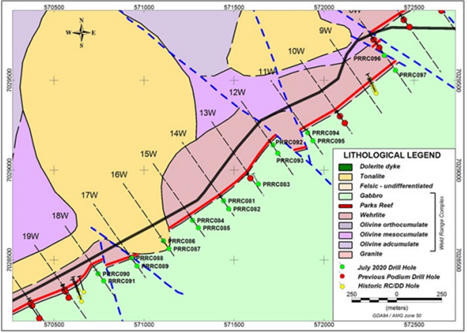 More notably, the thick zone of base metal enrichment highlighting the high-value intervals in the Upper PGM Horizon include the following:

Significantly, POD also discovered a high-value interval with coincident base metals plus PGM is characterised by highest platinum and gold values comprising drill hole PRRC088 which recorded 4m @ 4.41g/t 3E PGM and 0.67% Cu from 18m within this zone. Furthermore, the 3E results comprise of 1.86g/t platinum plus 0.82g/t palladium and 1.73g/t gold.

POD has analysed three drill holes from the latest drilling for rhodium. As a result, POD observed a concentration of rhodium in the footwall of Parks Reef consistent with previous drill holes tested with the following results:

Podium shares its intention to continue spot assay of drill holes while drilling for inferred classified resources. At the same time, POD also looks forward to routinely assay for rhodium upon moving to in-fill drilling for indicated resources.

Importantly, POD has received proceeds from the sale of shares in EV Metals Group plc totalling $1.7 million with an additional $400,000 due in near term.

Subsequent to the receipt of assay results from the latest drilling, POD is continuing with the metallurgical test work which is anticipated to assist in commencing engineering design for defining a development strategy for the Parks Reef Project.

Besides this, the Company has initiated resource modelling with an objective to broaden the total resources to a combined length of 8.5km, comprising a consistent resource block covering around 6.1 km over the western half of Parks Reef.