ASX-listed gold and phosphate explorer, Avenira Limited (ASX:AEV) released its cashflow and activities report for the quarter ending on 30 September 2020.

During the September quarter, the company reported the completion of Placement and Entitlement issue to raise $3.4 million for the upcoming drilling activities at the Jundee South gold project. Over $2.2 million were raised through placement via issuance of 277.28 million new shares at an issue price of $0.008 a share.

Through the Entitlement Issue, Avenira raised another $1.2 million under a non-renounceable pro-rata entitlement offer. The company has offered an opportunity to subscribe 2 new shares for every seven existing shares at the issue price of $0.008 a share. The capital raised would be primarily used to undertake a drilling campaign at Jundee South project.

Avenira has commenced an air core drilling program to test Priority 1 and Priority 2 targets in the Jundee South tenements. The company is using high-resolution ground magnetic survey to identify and locate regional subsurface anomalies like faults and shear zones.

Avenira has so far used the magnetic survey on four Priority 1 targets to get precise local fault location and map the rock contacts with accuracy. The magnetic survey data were used for more precise interpretation.

The initial drilling results from a Priority 2 target hole are encouraging. The rocks show potential mineralisation fluids which are responsible for Quartz-Sericite-Pyrite alteration. These alterations indicate the circulation of hydrothermal fluids, which precedes the gold emplacement. 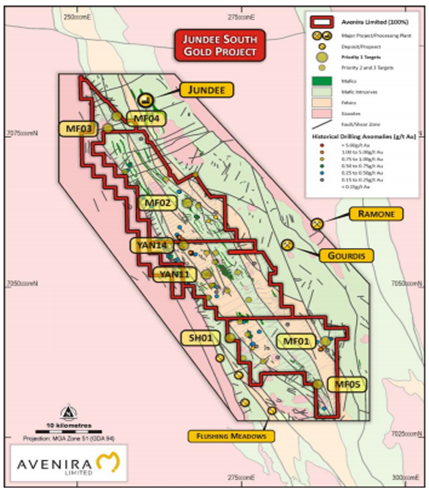 Avenira owns a strong portfolio of gold and phosphate projects across Australia. The explorer is progressing on exploration and development of their gold assets at Jundee South.