Minerals exploration and developer Renegade Exploration Limited (ASX:RNX) remains in pursuit to evolve into a mid-tier resource company. The Company aims to achieve this milestone through finding, procurement, and advancement of economic mineral land assets.

In line with this objective, RNX has declared its agreement to acquire the Joint Venture Interest in the Carpentaria Joint Venture Agreement (JVA) held by Sovereign Metals Limited (ASX:SVM). Glencore plc’s subsidiary, Mount Isa Mines Limited (MIM), is the other party in the JVA.

Previous Update: ASX:RNX On The Hunt For Drilling Targets At Yandal East, Begins A Drone Survey

RNX has agreed to make the following payments to SVM in consideration for acquiring SVM’s interest in the JVA:

Notably, any RNX shares issued to SVN in relation to this acquisition are subject to a trading restriction of three months. Moreover, the parties are entitled to exercise their ability to agree to any of the payment methods mentioned above, including a combination of cash and RNX shares. 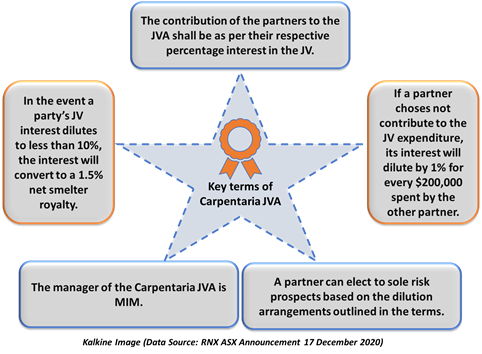 RNX has been actively pursuing this transaction and has been aggressively engaged in the same for around five months. RNX believes that this transaction is highly attractive due to the exposure of the JVA to copper and gold in the Cloncurry region of Queensland. Significantly, the initial due diligence indicates the possibility for assessing opportunities that have been traced through historical work across tenements of gold as well as copper prospects.

Although the Carpentaria JVA was initially formed in 2001, yet SVM acquired its interest in the joint venture in the year 2007. The total expenditure of approximately $14.5 million has been incurred on the Carpentaria JVA, wherein MIM contributed around $11.6 million and SVM contributing $2.9 million over that period.

Important Update: RNX Share Price Rallies 300% In the Past Year, A Look at Past Activities and Potential Opportunities

RNX, however, aims to generate long-term value for its shareholders and seems keen to share the outcome of any discussions with MIM. This could be in relation to the development of any potential opportunities that can be identified.