The two highly prolific projects of ERL include the Yuinmery Copper-Gold Project and the Penny’s Gold Project, where the Company has been advancing activities for resource development and anticipates undertaking further exploration activities.

Here, we shall capture Empire Resources’ journey starting from the acquisition of additional tenements at Yuinmery Project till the latest outstanding results received from the drilling at the project. 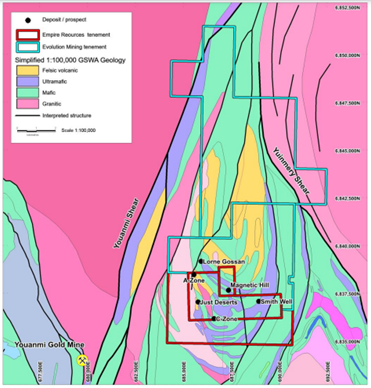 ERL had exercised its option to acquire the EVN Tenements in return for a 1.25% Net Smelter Royalty (NSR) payable on EVN’s earned part of the tenements, which was 91.89% at the time of acquisition. The outstanding 8.11% interest is a contributing interest that is held by another party.

Pleasingly, the tenements acquired from EVN offered a geological extension to Empire’s Yuinmery tenure as the Company has knowledge of the geological potential of the tenements. Moreover, the acquisition empowered ERL to explore extensions of its present copper-gold mineralisation, as well as explore geological targets discovered by the Company.

Commencement of Drilling And Positive Results

ERL commenced drilling at its Yuinmery Copper-Gold Project in November 2019 through a 3,000m reconnaissance drilling program that was aimed at testing several high priority targets discovered by the autonomous geological review of the ERL’s projects.

The drilling returned strongly anomalous copper-gold mineralisation within the regolith across multiple prospects at the Yuinmery Copper-Gold Project, including

Overall, the reconnaissance drilling added several prospective targets to ERL’s portfolio and simultaneously offered a great deal of information regarding the interpretation and discovery of primary copper sulphide mineralisation at the project to ERL’s technical team.

Furthermore, the 3.5km copper-gold horizon identified between YT01 and YT19 prospects continues to strengthen the potential for fresh discoveries in the project area through returning strong copper-gold mineralisation.

Broad copper-gold sulphide mineralisation within the newly identified southern horizon was indicated by the Step out RC drilling in March at YT01 and resulted from 4m composite sampling included the following:

Importantly, the encouraging results indicate the potential for discovery of new copper-gold deposits within the new southern horizon at YT01 prospect.

The Yuinmery Project has continuously delivered excellent exploration results with PGE’s observed in historically high concentrations to the west of the Smith Well Prospect. This, along with the existence of a wide zone of palladium and platinum metals at the YT01 Prospect strengthens ERL’s belief about the excellent opportunities for substantial discoveries offered by Yuinmery Project.

In due course, ERL seeks to progress further with the advancement of its exploration efforts at Yuinmery and seeks to capture value from direct exploration across its project portfolio. Furthermore, ERL is eager to identify value-adding investment opportunities that are in line with its development objectives and benefit its shareholders.