Electric vehicles (EVs) are the future of the world, and many countries are racing towards making their economies less reliant on fossil fuels and reduce their carbon footprint. Lithium-ion batteries which essentially power EVs would prove to be the key factor for both of these goals.

The demand for batteries is directly linked to the EV revolution, which is progressing faster than ever. However, the adoption of these batteries is also dependent on cost effectiveness and performance. Clearly, battery makers or suppliers of raw materials for manufacturing them have a huge potential further down the road. One company that is capitalising on delivering some of the smartest battery technologies and materials for a much diverse ecosystem, including electronics, is NOVONIX Limited (ASX:NVX).

NOVONIX’s shares have been on a tear for last few months. After a successful breakout on the charts, the stock hasn’t looked back, delivering a mammoth 173.27% return in the last three months. 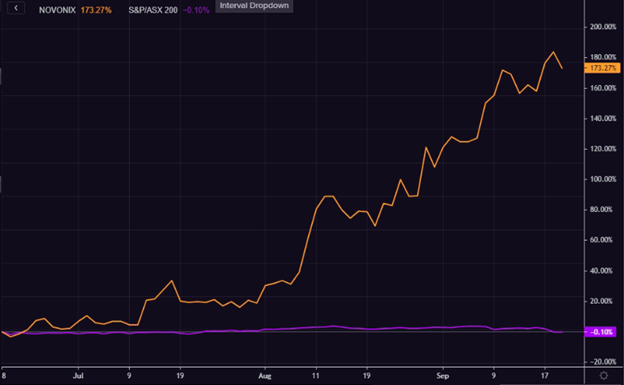 The NVX share price has witnessed a one-sided rally during the last three months, beating Australian benchmark index, the ASX 200, hands down. During the same three-month period, the ASX 200 delivered a negative 0.1%.

What does the company do?

NOVONIX provides battery materials and technology solutions for EVs, grid energy storage and other electronic items. The company provides what it claims to be the most accurate and precise battery testing services and equipment in the world. Results are delivered rapidly in a matter of weeks.

The company focusses on making all of its processes a green choice with less energy requirements and less emissions than alternatives.

It is also the first supplier of US-made, high-capacity long-life synthetic anode material, securing a sales agreement with technology giant Samsung SDI, and a Memorandum of Understanding (MOU) agreement with SANYO. Some of the other prestigious customers of the company are SK Innovations, LG Chem, 3M, and China Bak Battery, Inc,.

What triggered a rally in the NVX share price

The primary trigger behind a surge in investors’ demand for NVX shares is the company’s quarterly update for the period ended 30 June 2021. In April, the company completed the installation of its first-generation 2 furnace system, built by Harper under its strategic partnership program. Other highlights for the quarter were:

What else fuelled the rally

As the stock was on the move after its quarterly update, the management came out with a development that would eventually take the stock to its new all-time high levels. During mid-August 2021, the company entered into an agreement to sell a 16% stake to US-based energy company, Phillips 66.

One of the leading global manufacturers of specialty coke, a key precursor in the production of batteries, Phillips 66’s confidence in Australia-based NOVONIX cheered investors right away. On the same day, the stock was up 15.5% by market close, backed by massive volume of over 15 million shares.

The capital infusion by Phillips 66 will aid in the capacity expansion of NOVONIX for an additional 30,000 mt/year, which is expected to be completed by 2025.

Shareholding pattern of the company

A total of 41.97% stake is being held by the top 15 shareholders of the company. Trevor Charles, an Australian businessman with an interest in the Australian energy sector holds 15.87% interest, thus becoming the biggest individual stakeholder of NOVONIX.

Founder Georgory Alexander John Baynton is the second-largest shareholder of the company with a 6.25% stake, valuing his total shareholding at around AU$25.29 million. Agro Investments Limited, BN & Partners Deutschland AG, Netwealth Investments Limited and CEO Chris burns are among the top 15 shareholders who increased their stake in the company, according to the latest filings.