Saunders International Limited (ASX:SND) is recognised for its diversity and strengthening market position across different sectors. Since its establishment in 1951, the Company has been actively supporting the development of Australian industries.

The Company’s five-year strategy set in 2020, was built on three pillars - FIX, GROW and ACQUIRE. While the FIX phase is now complete, Saunders continues to be on the sustainable GROW phase. “The business is now in a position to enter the ACQUIRE phase”, says Managing Director Mark Benson.

During FY20, Saunders was awarded a record value of new contracts, allowing the Company to kickstart FY21 with an order book of $110 million. This order book comprises significant contracts for customers across a diverse range of sectors including road, rail, defence, water, mineral processing, and oil & gas.

GOOD READ: After an upbeat FY20, will Saunders continue the happy journey in FY21?

In this backdrop, let us cast an eye on Saunders’ latest project wins in FY21.

In September 2020, Saunders secured a new project for Laing O’Rourke in the defence sector. The contract is deemed to be a significant win for the Company’s defence sector strategy. It depicts Saunders’ ability to deliver multidisciplined services via its renewed operating model. 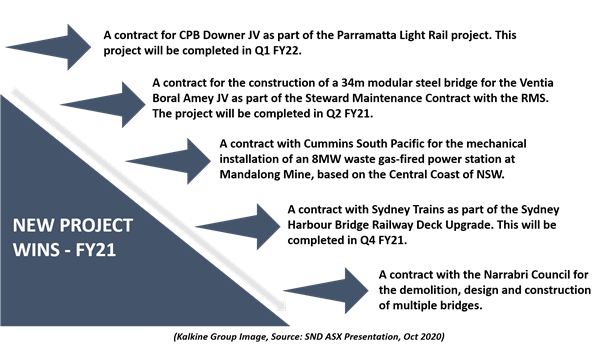 Besides, the project adds to the Company’s presence in Darwin with its current contract with the NOVA NACAP JV.

The Company has already begun the design works and expects to be on site in Q2 2021 with revenue continuing through to FY23.

Continuing the project winning momentum in FY21, Saunders has added a further $10 million of contract wins, spread across the group.

Besides, Saunders is the preferred contractor for a further four opportunities in the civil and defence sectors that have a combined value of $5.5 million.