The usage of drones, or Remotely Piloted Aircraft Systems (RPAS), has risen sharply across Australia. Continuous advancements in technology are facilitating varied applications of drones across diverse industries, including agriculture, food delivery, and infrastructure, among others.

With a growing demand for drone tech-related products and services, ASX-listed companies offering drone technology solutions have witnessed a surge in their respective share price.

RELATED: A look at the Drone Technology landscape

In this article, we would be looking at one such player engaged in drone technology, DroneShield Limited, that has secured two big deals in the last two days. Let us throw some light on these deals.

On 11 September 2020, DroneShield Limited (ASX:DRO), a global leader in drone security technology, received an order for the DroneSentryTM system for the army of a South-East Asian nation, allied with the west.

The order is a first of its kind for the Asian country and comprises a complete DroneSentryTM solution. It consists of:

Using the DroneShieldCompleteTM Command-and-Control (C2) engine, sensor feeds are fused, allowing a user interface that is intuitive and comprehensive drone threats reporting capability. DroneShield anticipates that the initial order might lead to big sales in the future post the system deployment.

The Company expects to deliver the first order in the fourth quarter of 2020, with full payment due before the order is transported.

South-East Asian country’s order is another achievement of the Company after it received funding from the US Department of Defense for the development of DroneShieldCompleteTM Command-and-Control (C2) system a day earlier.

The DroneSentryTM system combines the Company’s countermeasures and sensors in an integrated platform which can be utilized in installations, either temporary or permanent. It has a radar, RfOne RF detectors, and DroneOpt cameras, this system, correlates the existing data for users and gives full situational understanding and the fastest response to airborne threats. DroneOpt (camera) sensors are capable of deriving advantage of DroneOptID that gives the recent in computer vision technology to find, validate and track drones in real-time. 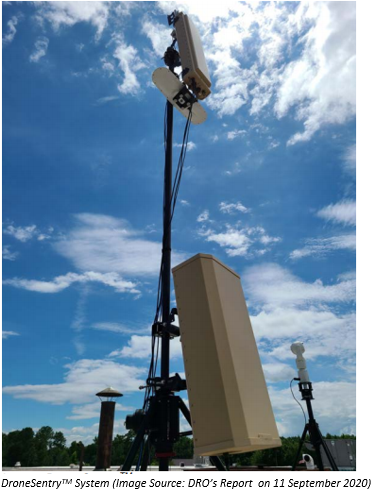 Funding Deal with the United States Department of Defense:

On 10 September 2020, DroneShield Ltd revealed that it obtained financial support from the US Department of Defense (DoD) for the development of DroneShieldCompleteTM Command-and-Control system.

A sole source contract was used to provide the funding. The division of the US DoD that has offered the funding is working with DRO for the first time.

The DoD has provided the funds for pre-approved feature improvements with the project likely to go on for several months.

Notably, during that time frame, the DoD would make various purchases of DroneShield’s C-UAS equipment, which would run on the enhanced DroneShieldCompleteTM Command-and-Control System.

Oleg Vornik, CEO of DroneShield, stated that the Company is putting efforts to ensure that DroneShieldCompleteTM Command-and-Control System remains at the leading edge of client needs. Mr Vornik also indicated that the project highlights the Company’s leadership in product/sensor manufacturing as well as an integrator of the fixed site and mobile C-UAS systems.

The project is a significant milestone for the Company in strengthening the close working relationship between the two parties.

DroneShieldCompleteTM is an insightful and feature-rich Command-and-Control system that gives real-time alerting, tracking, and reporting information for local DroneShield as well as third party sensors.

The recent substantial deals have benefitted DroneShield’s stock with the share price surging 21.59% in the last five days. The stock has done well amid the pandemic-led crisis with impressive returns of 57.69% and 41.38% in the previous three months and six months, respectively.

DRO share price closed at A$0.205 on 11 September, in line with its previous close. The Company has a market cap of A$79.58 million and ~388.2 million outstanding shares.