Multi-disciplined engineering and construction company, Saunders International Limited (ASX:SND) made a successful entry into the defence sector during FY20. Completion of one project was followed by the grant of a further two contracts whilst bidding on further opportunities.

The new contract update, which was released to the market on 15 September 2020, saw investors taking ample interest in Saunders’ shares on the ASX. Consequently, SND recorded a fresh 52-week high of $ 0.7 during the day on 15 September.

Reportedly, the contract value is around $ 26 million. Laing O’Rourke will be the Managing Contractor for the same. The Company will begin design work immediately, while construction works are scheduled to commence in Q2 2021. These works are due for completion by the end of 2022. Saunders believes that the contract will contribute revenue through FY21 to FY23. 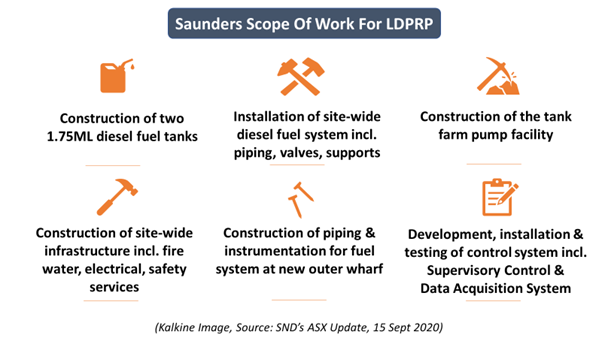 Defence, besides water and energy, is an emerging sector for services that Saunders’ offers. The Company forecasts strong spend in the infrastructure, industrial, minerals and defence sectors in FY21. In its Annual Report for FY20, Saunders intimated that in Australia, the Government spend is forecast at 2% of GDP by 2022 for defence.

Interestingly, one of the Company’s strategic objectives is to position Saunders for major national fuels program for the defence sector. The sector also forms a key growth focus area where the Company seeks expansion.

The contract with Laing O’Rourke, therefore, marks a significant win for the Company’s Defence sector strategy. It is an illustration of Saunders’ ability to deliver value-creating multidisciplined services via its renewed operating model.

The LDPRP project is worth circa $ 470 million and lies in Darwin. It is likely to enhance the Australian Defence Force’s capability to carry out operations and exercises in the north of Australia. Besides, the Project may provide fuel storage and refuelling capabilities to meet existing and expected demand.

The Company recently entered this emerging market with the delivery of a contract and two further contract awards in FY20. Clients include Lend Lease and Nova NACAP JV.