An environmental solutions company that rocketed over 900% in one year

Other challenges such as contaminated water, hazardous waste, etc., have also become a concern. Although there are many companies that are doing their bit to protect the environment in the form of corporate social responsibility (CSR) activities, some corporates are specifically committed to saving the environment with their commercialised solutions and offerings. One such company, which has become one of investors’ favourites in the recent times is The Environmental Group Limited (ASX:EGL).

The EGL share price has proven to be one of the best performing shares on the Australian bourse in the last one year. EGL shares have rallied by a whopping 980.65% in the last one-year period, last closing at AU$0.035 on 6 January 2022. 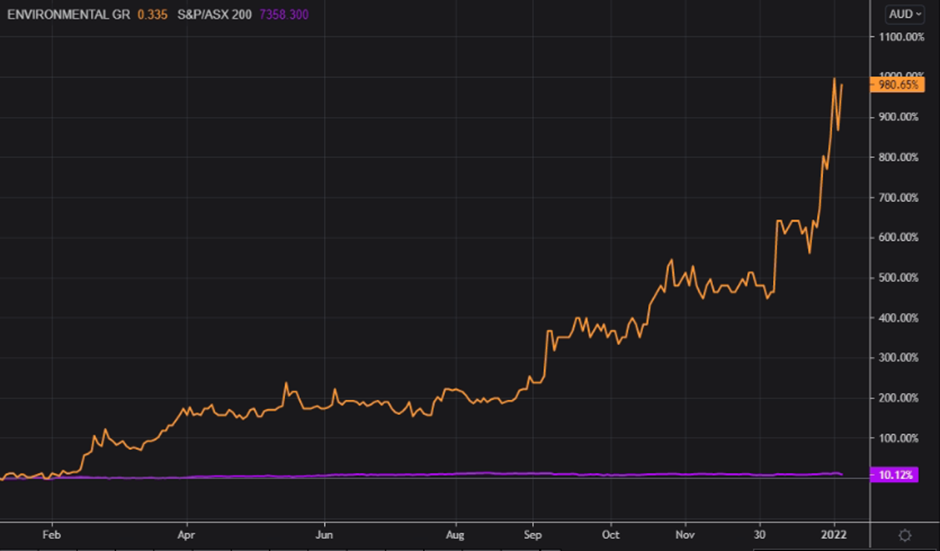 The strong rally of EGL shares has put the benchmark ASX 200 return to shame, as the latter has delivered a return of 10.12% in the same period.

So, what does the company do?

Based in Australia, The Environmental Group Limited is actively engaged in designing and manufacturing equipment to enhance air quality, minimise water pollution, reduce carbon emissions and upgrade the process of bio waste to energy production.

The company operates through five business units, each focusing on a different environmental issue:

The company’s Baltec IES unit performed well during this period. Sales remained strong at around AU$19.16 million and EBIT was reported at AU$1.09 million, compared to a negative EBIT of AU$326,111 in FY20. Baltec IES also continued to develop new strategic plans to efficiently deliver its products to global markets during the COVID-19 pandemic.

TAPC also completed a very strong year with a rise in EBIT to AU$857,560, a 196% increase over FY20, despite clocking a reduced revenue of AU$4.55 million. Throughout the year, TAPC was focused on building a broad client base, enabling it to execute higher levels of spare parts, sales and services in order to generate a more stable and consistent earnings base.

Sydney-based investment manager, Capital H Management Pty Limited is the largest shareholder of the company, having 10.42% stake, accounting for approximately AU$5.58 million worth of shares. Denise Richardson and Former Managing Director Elis Richardson share the tag of the second-biggest owners of the company, with both holding 8.59% stake or about 26.5 million shares each.

Ace Property holdings comes at the third spot for the biggest shareholders of the company, holding 5.53% or 17.06 million shares, accounting for a total value of AU$1.37 million.