Gold miner, Troy Resources Limited (ASX:TRY) has provided another shimmering update on its exploration activities at the flagship Karouni Project in Guyana.

The 2 drill holes targeted the extremities of the known mineralisation with an anticipation to intercept only minimal mineralisation than the received assay results from the recent drilling program.

The two holes were drilled along the southern and northern boundaries of the Smarts-Hicks Shear and not along the primary mineralized zone. However, they resulted in intersections with high grade gold mineralisation. The shear zone comprises an array of smaller, internal shears which control the position, distribution and tenor of the gold mineralisation.

SDD191 – The drill hole tested the zone above the step-over of the Smarts-Hicks shear zone, which comprises of sediments and andesite. The upper portion of the drill hole intersected the upper sections of basalt and TiO dolerites which at depth host the gold mineralisation.

SDD192 – The drill hole tested the extensions of the primary mineralisation within the hanging wall shear and outside. The results display that basalts and TiO dolerites host the gold mineralisation at deeper sections. 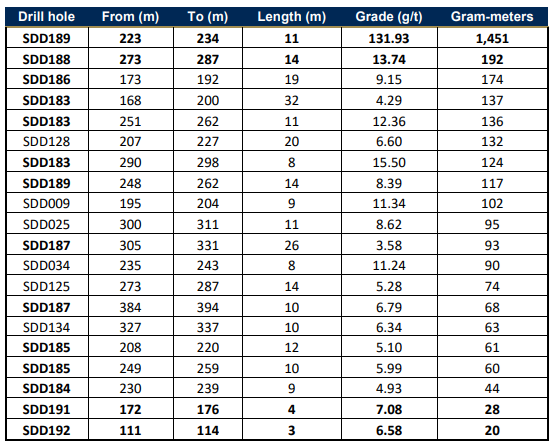 The diamond drilling was completed at the Smarts Underground to estimate and upgrade the Mineral Resource and maiden Ore Reserve which is scheduled for completion during the December quarter.

Additionally, Troy has also completed the 3 geotechnical hole (SDD190, SDD193 and SDD194), which were designed to facilitate the planning of portal and decline location and assist in stope design. The hole SDD190 intersected visible gold sections and the samples have been submitted for assaying following the completion of the geotechnical studies.

The drill program focused on the infill high-grade intersections from the historical drilling programs on the main Smarts-Hicks Shear. The best intersections include:

The mineralisation at Smarts NW is included in the Mineral Resource estimate as Inferred resources. In case the additional drilling is successful, it may confirm the continuity of the mineralisation and the presence of another high-grade mineralised zone similar to the Smarts Underground.

The new campaign began at the Smarts NW almost a week ago, so far Troy has already completed drilling at the holes SDD195 and SDD196 and nears completion at the SDD197. The samples from the two completed holes have already been sent for evaluation. It is to be noted that all drill holes so far have intersected the main shear zone at the expected location.

The infill drilling on the north-west section of the Goldstar Prospect returned numerous high-grade intersections including:

The company has already conducted a follow-up campaign of 7 trench with the results for 6 already out. The best intersections are-

The trench results confirm gold mineralisation within a zone of true width 8 to 13 metres virtually at surface. The trench samples also confirmed the continuity of mineralisation. Further, exploration steps at Goldstar includes-