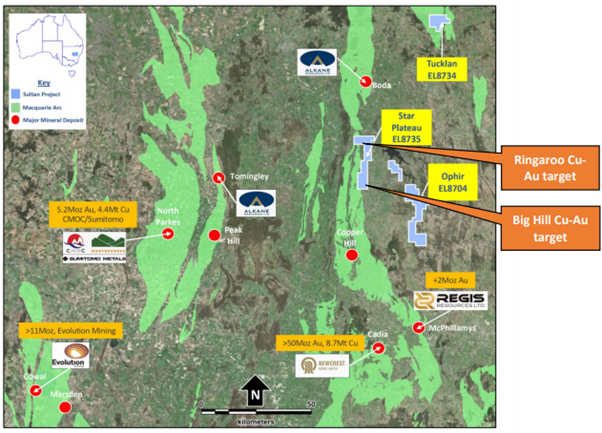 The survey has been completed on the already identified gold and copper anomalous magnetic-high complex, almost 8 kilometres south of Wellington in the New South Wales. The current exploration program is designed to identify drilling prospects with strong potential to host porphyry-style Au-Cu mineralisation at the Star Plateau tenement (EL8735).

During August and September 2020, Fender Geophysics concluded 2 north-south lines and an east-west line of dipole-dipole IP survey across the magnetic anomalies at Ringaroo which coincides with a massive gold and copper soil geochemical anomaly.

All results of the survey have already been processed and modelled, which outlines optimistic chargeability and resistivity response coincident with the historically identified soil anomalies.

The induced polarisation technique is considered effective for porphyry exploration to identify the presence of disseminated sulphides in the mineralised region which encompasses pyrite alteration halos associated with porphyry mineralisation.

Important Read: Is Sultan on the pursuit of next Significant discovery in LFB?

The IP anomalies have been supported by surface soil geochemical samples and correlate with high Au and Cu results within the magnetic high feature. Historical field exploration by Sultan identified Ordovician volcanics over the project area which hosts polymict volcaniclastic conglomerates and volcanic breccias. Similar rock deposits are common to both the Cadia and Northparkes where gold and copper mineralisation is held within porphyry deposits.

The anticipated exploration program at Ringaroo will include- 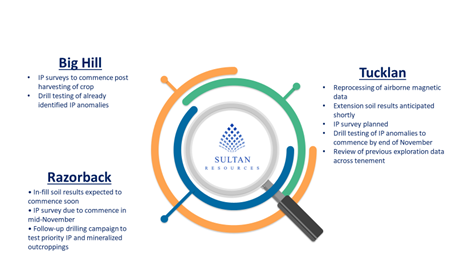 Sultan holds premium Gold-Copper projects in the Lachlan Fold Belt which includes the Big Hill, Tucklan and Ringaroo prospects. The recent exploration success at Tucklan prepares the Tucklan deposit for the drilling program. Sultan has already completed permitting and land access negotiations with the drilling program scheduled to commence as soon as the crops at the drill targets are harvested. The harvesting of crops has already begun in early November and Sultan is anticipated to mobilise rigs at Tucklan prospect by the end of November.