Gold exploration momentum of Musgrave Minerals Limited (ASX:MGV) is in full swing with remarkable success on Starlight discovery, at the Break of Day deposit stationed at the Company’s 100% owned Cue Gold Project. The Company is targeting a major high-grade system and near-term production at the project hosting over 28km of the shear zone.

Reverse circulation (RC) and diamond drilling (DD) programs have confirmed and extended the high-grade mineralisation of the precious yellow metal at Starlight where it remains open down plunge.

Adding hues onto the rainbow, regional drilling program focused at Starlight analogues has intersected high-grade gold at a new target, offering strong potential for Starlight repeats. The fusion of strategic undertakings has pepped up Musgrave’s exploration endeavours, advancing the journey of Musgrave Minerals.

Let us explore the upside potential of the Company’s Cue Gold Project, underpinned by the robust exploration outcomes at Starlight and potential Starlight analogues.

The exploration momentum at Cue Project has been nurtured ever since the identification of the high-grade Starlight Link-Lode structure, witnessing fantastic assay results. New high-grade Starlight discovery has hardpan cover of only 3m and high margin deposit to a vertical depth of over 250m.

Significantly, intercepts at Starlight which are also sub-parallel to historical drilling are not included in the current resource. Starlight discovery opens search space and creates an opportunity to grow resources, thereby demonstrating the potential for repetitions along trend.

The exploration program at Starlight has drilled more than 60 RC holes and approximately 17 DD holes. 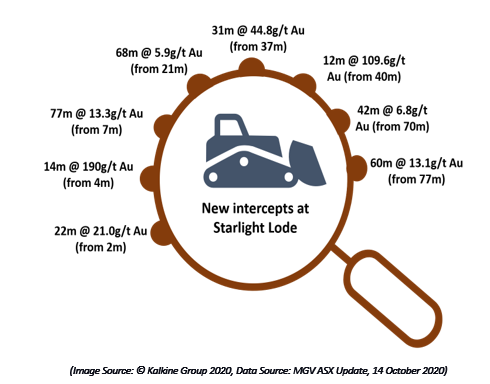 The drilling program at Cue Project intersected new discoveries which appear to change the paradigm by increasing the search space. More than 20 untested targets have been identified which are analogous to the Starlight setting.

Aimed at further bolstering and expanding its gold resources, the Company is currently undertaking aircore/RC drilling focusing on new targets over more than 17,000m. The assay results for the first pass drill testing is awaited.

READ MORE: Musgrave Minerals (ASX:MGV) Reports High-Grade Gold at a New Target to the South Of Starlight, Stock Zooms up by over 8% 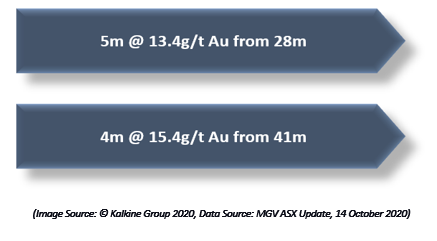 Target 2 is open along strike and down dip and follow-up drilling is planned for late October.

The outcomes of the metallurgical tests indicate the use of a low amount of reagent, absence of deleterious elements and reduced processing cost. The Company has commenced metallurgical test work at Starlight.