Following schedule indicates the type and percentage of voting for various resolutions put forward at the AGM: 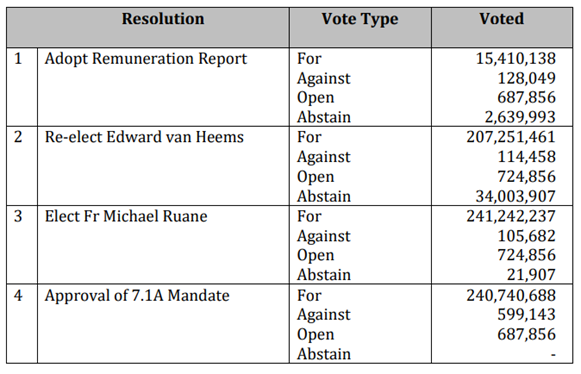 The Company also shed some light on its key milestones achieved over the past, which include the following:

Other than these, NTM also witnessed large gains in share price and register improvement in market cap as well as liquidity position by maintaining suitable cash levels. The latest of all the key developments of NTM is the proposed merger with Dacian Gold Limited (ASX:DCN).

Exactly a year ago, NTM shared its positioning to deliver significant shareholder value based on the discovery of the Hub deposit and is well financed with a vigorous exploration program over the subsequent one year’s time.

Did you read: A Look At The Projects Of NTM Gold (ASX:NTM) And The Latest Developments At The Redcliffe Project

NTM strongly believes that they have delivered on this intended goal and the same is reflected in its share price, which has more than doubled and the market capitalisation growing by more than 150% simultaneously.

Notably, NTM share price has increased by 126.42% over the year till 20 November 2020, and the stock currently has a market capitalisation of $82.06 million.

Did you read: NTM Gold Limited’s (ASX:NTM) Growth Through Exploration In An Outstanding Region

NTM’s success can be credited to the commitment and hard work of the Company’s employees as well as executives. In addition to this, NTM’s successful advancement of its resource base and extended footprint subsequent to the acquisition of the Wells Group tenements helped to lure the attention from a range of fresh investors.

The recently inked proposed merger with Dacian Gold Limited through a Scheme of Arrangement is believed to be the outcome of such discussions with investors. The transaction is anticipated to offer substantial benefits to both parties and at the same time, shall offer an opportunity for shareholders to take part in the upcoming phase of NTM’s continuing success story.

Through the lens of NTM’s vision, the proposed merger is expected to provide a fast-tracked opportunity to monetize the value of the Redcliffe project at an appealing premium. At the same time, NTM shall be able to retain substantial equity of more than 30% in the consolidated entity while taking part in the upcoming successes of the pooled pipeline of exploration targets.

Further, NTM offers a high-grade inventory that offers a prospective extended mine life as well as the potential for enhanced profitability when viewed from a Dacian standpoint.

The transaction is believed to be a compelling event for NTM that offers financial as well as operational strength to unravel the true potential of its Redcliffe Gold Project, which is around 720km2 tenement holding. The project area centres on the Mertondale Shear Zone, which is highly prospective interpreted key crustal structure significant for gold mineralisation.

The zone is a major gold-rich fluid pathway where multiple deposits have been discovered to date.

More details about the merger at: Merger Alert! ASX:NTM And ASX:DCN To Unlock Shareholder Value Through Regional Consolidation

Extension of high-grade mineralisation at Hub

Lately, NTM has extended the high-grade mineralisation through extensional diamond holes by a further 100m vertically and 190m to the south at the Redcliffe Gold Project’s Hub Prospect and returned:

The continued growth at the Hub deposit with each drill campaign shows that Hub has major prospects above the near-surface high-grade oxide zone.

*All currency used is in AUD unless specified. 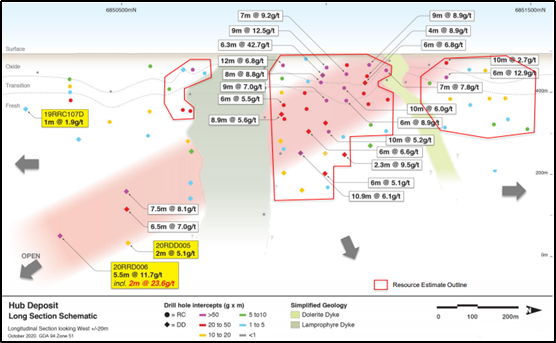 The Hub prospect was discovered in October 2018 through an aircore drilling and has continued to grow with each drill campaign.

NTM looks to capture substantial benefits through an immediate transition from an explorer to gold producer and avail benefits like deeper trading liquidity, broader research coverage and better market positioning.