Emerging  mineral explorer, NTM Gold Limited (ASX:NTM) has been aggressively exploring in the Eastern Goldfields of Western Australia. NTM is focused on the Leonora region, a highly prospective area with a long history of gold discovery and mining.

The Company had recently released its Diggers and Dealers investor presentation, wherein NTM highlighted its growth through its consistent exploration efforts at the Redcliffe Gold Project.

NTM’s 100% owned Redcliffe Gold Project is situated in the Eastern Goldfields Region of Western Australia and includes ~720 km2 of tenure. NTM’s resource estimate for the project includes several separate deposits. Most of these deposits are still open along strike and at depth.

The Company’s consistent and focused progress at Redcliffe Project validates the highly prospective nature of the project and indicates significant upside for the Company.

The Redcliffe project is the primary focal point for NTM and has returned encouraging results. Further, the project area is a strategic landholding with four large gold operations nearby and a potential for regional consolidation and/or processing synergies.

Related: How Is Empire Resources’ Investment In NTM Gold Placed Amid Market Volatility?

The Redcliffe Gold Project is centred on the highly prospective Mertondale Shear Zone, which is a major gold-rich fluid pathway with multiple deposits discovered to date. This zone lies approximately 40km along strike within the Redcliffe Project and is a host to multiple key prospects including the Hub, GTS, Redcliffe East and Aliso prospects.

Mineralisation across this prolific zone is associated with kinks, bends, offsets and intrusives, often beside geological contacts and occurs from the far north (Aliso) to the southern extensions (GTS).

The added advantage for NTM Gold is the limited historical exploration efforts to shallow depths at the Redcliffe project with large areas remaining untested. The identification of the Hub prospect indicates significant potential for NTM to discover meaningful orebodies near the surface as well as at depth. 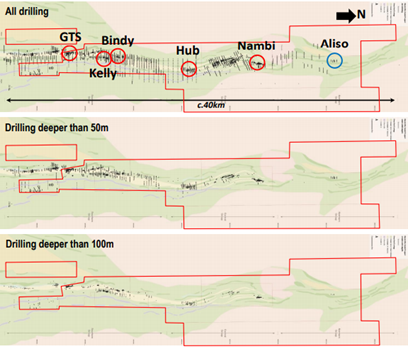 The area is further characterised by the highly prospective geology that demonstrates mineralisation over the entire length of the MSZ. Presently, NTM is progressing well with drilling to test high priority targets at the MSZ.

The Hub prospect that was discovered in October 2018 through aircore drilling is characterised by high-grade oxide close to surface and has a Maiden Mineral Resource Estimate of 890.3kt @ 4.9 g/t gold for 141koz gold.

Significantly, the deposit continues to be open at depth and along strike.

Recently, NTM had undertaken drilling at the Redcliffe Gold Project to test the Hub prospect and GTS deposits along strike and depth extensions. Both remain open along strike, at depth and down plunge; however, drilling shall initially focus on the southern plunge potential.

High-grade mineralisation of 6.5m @ 7.0 g/t Au from 459m, including 2.5m @ 12.2 g/t Au was intersected through diamond drill hole 20RDD003 that tested the southern plunge of the Hub mineralisation at depth.

Did you read: A Look At The Projects Of NTM Gold (ASX:NTM) And The Latest Developments At The Redcliffe Project

NTM looks forward to capitalising on the opportunity to discover and grow gold mineralisation through exploration. Further, the Company believes that the growing resource scale shall enhance value and prospects for monetising strategy of the project.

Interesting Read: Empire Resource’s Investment in NTM Gold Proves Lucrative, Grows From $0.0325 to ~$0.09 Within a Year