The Company announced assay results for a further 56 aircore/reverse circulation (RC) holes, drilled as a part of the ongoing regional exploration program. The regional drilling intersected high-grade gold at the Leviticus target (Target 9), which lies 1.8km south of Break of Day.

Lens through the Regional Drill Program

The Company is completing single traverses of aircore/RC drill holes as a first pass test over ~25 individual targets, with the regional program extended to over 18,000m. To date, a total of 273 aircore/RC holes have been completed across 16,000m over 20 of a planned 25 targets, where drilling was planned. Musgrave has received assays for 105 holes across 12 targets. Targets derived from geochemical, geological, and geophysical data are being tested.

Casting an Eye over Leviticus Target

The Leviticus target or Target 9 returned the best results in the latest batch of assays. To date, the Company has received assays for 12 of the completed 20 traverses. Notably, Musgrave intersected anomalous gold at 10 of the targets, which also includes the high-grade, near-surface results from Targets 2 and 9.

An existing inferred resource of 42,000t @ 6.0g/t Au for 8,000oz is hosted by the Leviticus target. Implementation of Starlight’s geological knowledge and re-interpretation of the new intercepts at Target 9 suggest a north-northwest strike, permissive for the gold lodes.

Considering the possibility of north-north-west striking lodes, it seems like that northern limit or depth extent of the gold mineralisation at Leviticus have not been tested in the historical drilling. Musgrave is planning further drilling to test the hypothesis in the next few weeks.

One-metre individual samples have been analysed from aircore/RC holes drilled in the current program, with all reported intervals assaying 6m above 0.1g/t Au are of potential significance. 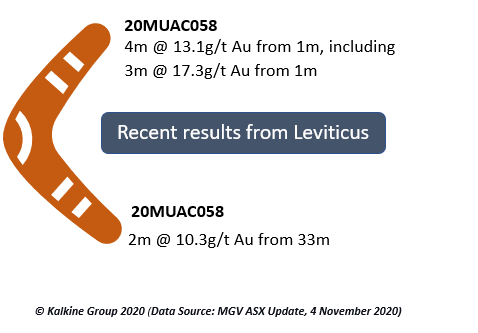 The initial drilling indicates the possibility of two sub-parallel gold lodes which strikes north- northwest. To define the strike as well as depth extent of the mineralised position, the Company would be required to undertake additional follow-up drilling

Anomalous gold results were also returned from drilling at targets 8, 10, 11 and 23 in the regolith, with further assessment ongoing before follow-up drilling.

Furthermore, low-moderate grade gold mineralisation was intersected from the drilling of Target 6 at Lena. The mineralisation is consistent with the current geological model of Lena. 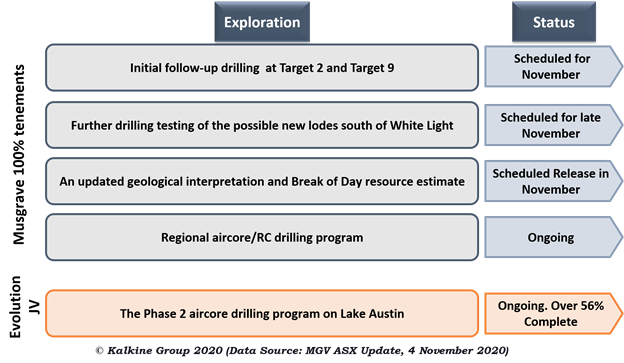