Gold exploration company Middle Island Resources Limited (ASX:MDI) recently released its September quarter 2020 report on the ASX, outlining key developments reported during the period. During the quarter, Middle Island’s activities were focused on the recommissioning of its Sandstone gold processing plant as early as feasible.

Let us quickly gaze through the key developments reported by the Company during the reported quarter:

Middle Island completed Phase 2 of its substantial 2020 drilling campaign during the quarter, which comprised an additional 20,000m of resource definition and exploration RC and diamond drilling.

The Company’s Phase 2 campaign was concentrated on infilling and extending the five new satellite gold deposits to an Indicated Resource category to build up the proposed recommissioning inventory for the project’s fully permitted on-site mill.

Below figure summarises some exciting results obtained from the Phase 1 & 2 drilling programs at the five new satellite gold deposits to date:

It is worth noting that Maiden and upgraded mineral resources aggregated 692,000oz gold (Au) at the Sandstone Project by September quarter’s end. However, the project’s mineral resources further rose to 732,000oz Au subsequent to the quarter.

The Company is yet to quantify maiden mineral resources for the Ridge and McClaren deposits.

In September 2020, Middle Island utilised the Controlled Placement Agreement (CPA) with Acuity Capital to raise $800k. The Company agreed to issue ~38.1 million ordinary MDI shares to Acuity Capital at an issue price of $0.021 per share.

The settlement for the agreement occurred on 2 October 2020. The capital raised was targeted to progress with the exploration and development at the Sandstone project.

To Read More about this capital raising activity, Click Here!

During the quarter, Middle Island was advised by the NT government that its 10 Exploration licences at the new Barkly Cu-Au project have been listed for the grant once coronavirus travel restrictions are eased or at its earlier election.

The Company plans to conduct a reconnaissance site visit to the Barkly Cu-Au project at the first opportunity once travel curbs are lifted. Following the formal grant, the Company will initially focus on:

Pre-competitive stratigraphic basement drilling has lately started at the project, the result of which is eagerly awaited.

Subsequent to the September quarter, Middle Island exercised the option to acquire the Wirraminna tenement (P57/1395) that includes the Wirraminna open pit deposit. The Company informed that the formal transfer of the tenement is currently in process. Once the transfer is registered, the Company intends to instantly apply for a Mining Lease over the tenement.

Middle Island held aggregate cash and investments worth $7.55 million as of 30 September 2020, which comprised $6.5 million in cash and $1.05 million in Tajiri Resources Corporation (TSXV:TAJ) ordinary shares.

The Company exercised an additional 458.7 million options during the quarter, which bolstered its cash balance by $4.55 million. A further 496.8 million in-the-money options are yet to be exercised, which means potential proceeds of an additional $3.88 million can become available to MDI before the option exercise date of 31 January 2022.

The next planned option exercise date will be 27 November 2020 as per the Company’s revised policy.

All in all, the Company is targeting a total of 80,000m of drilling on Sandstone project alone in CY 2020. The feasibility study (FS) is now well advanced and rescheduled for completion in January 2021 owing to delay in assaying.

With AUD gold price near record levels and chances of further price increases, Middle Island believes the timing of the FS and recommissioning decision is ideal. Besides, the Company remains well-funded and debt-free to finalise the 2020 drilling campaign and FS. 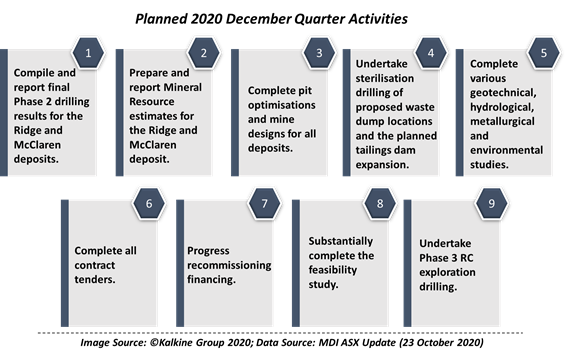