The stock of Australia-based gold exploration player, Middle Island Resources Limited (ASX:MDI), marked a rise of 8.7 per cent to $0.025 (as at 12:19 PM AEST) following the release of further significant results from Phase 2 RC (reverse circulation) drilling undergoing at Sandstone project.

Following the conclusion of Phase 1 RC drilling program, the Company is now progressing with Phase 2 RC and diamond drilling programs at Sandstone, focused at infilling and extending these five fresh satellite deposits. Till date, the Company has concluded over 40,000m of drilling in Phase 1 and Phase 2 in 2020.

Ridge deposit is one of a cluster of three new proximal satellite gold deposits at Sandstone, including McClaren and McIntyre, which are hosted within the southeast extension of the Shillington banded iron formation (BIF) package, situated on granted Mining Lease M57/129 and 2.5km from the Company’s gold processing plant.

The below figure summarises better extension and verification RC drill intercepts derived from the Ridge deposit: 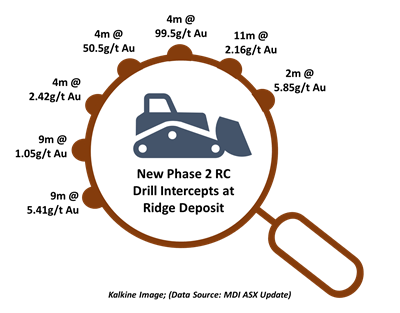 The gold mineralisation at Ridge deposit is hosted in an 8m to 25m thick, shallow to steeply northeast-dipping banded iron formation (BIF) unit which is mineralised from the surface.

Middle Island reported that the assays for further 37 RC holes (1,261m), which have been finalised recently to define northern extensions to the Ridge deposit, are still pending. Subject to these drilling results at the northern extremity, the Company expects the Ridge mineralised zone to represent a further new open pit deposit that can make a meaningful contribution to Sandstone’s 2020 feasibility study (FS) that is now well advanced.

Middle Island notified that that results from the Ridge RC holes are yet to be assessed while assays from the remaining two new satellite deposits at McClaren and Plum Pudding are expected to be announced in coming weeks.

Around 57 RC holes (~4,000m) are yet to be drilled before the completion of Phase 2 RC drilling campaign, incorporating reconnaissance RC drill traverses throughout the 1.1km-long Shillington Gap target between Ridge and Shillington gold deposits. 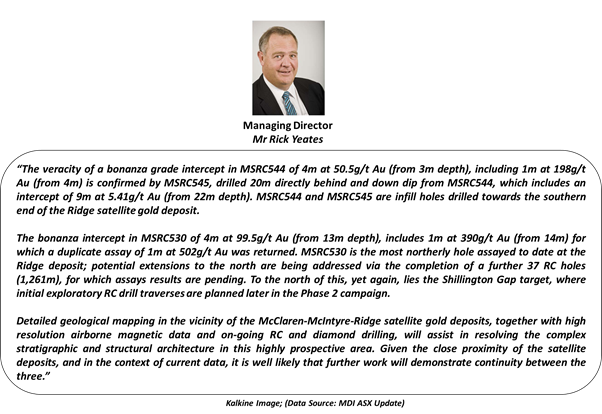