In a significant development, Horizon Minerals Limited (ASX: HRZ) has announced the completion of the divestment of its 100% stake in Nanadie Well Copper Project to Cyprium Metals Limited (ASX: CYM).

Horizon Minerals entered into Sales and Purchase Agreement with Cyprium Metals, which is a base metal exploration company. Horizon’s central objective from the divestment of the Nanadie Well Project is to streamline its approach towards gold exploration.

As already indicated by Horizon’s Managing Director Mr Jon Price, the Company’s principle focus is dedicated towards the development of a stand-alone gold project in the Kalgoorlie and Coolgardie regions. Significantly, Horizon Minerals in August commenced the largest ever drilling program of +70,000m within 75km of Kalgoorlie-Boulder in the world-class Goldfields region of Western Australia.

The completion of the divestment of Nanadie Well would bolster the primary gold-exploration objective. It would also retain exposure of Horizon Minerals to Nanadie Well along with the current copper projects of Cyprium in the Murchison as a substantial shareholder.

With this backdrop, let us dig deep into the details of the agreement and the Nanadie Well Project.

Lens through the Agreement

As Horizon Minerals announced to the ASX on 14 July 2020, it has agreed to divest its 100% interest in tenements E51/1040 and M51/887. The tenements are located ~75km to the east of Hollandaire copper deposits held by Cyprium Metals and include the Nanadie Well Cu-Au Project.

With the agreement, Horizon Minerals has also granted Cyprium a mining lease, M51/887 for the Nanadie Well Project.

The agreement between both the parties was agreed for a total consideration of A$1.5 million in cash and shares, based on 20-day Volume Weighted Average Price (VWAP).

Horizon Minerals indicated that it had received the completion of payment as well as share issue from Cyprium. Furthermore, all conditions precedent, which includes all mining information, signed transfers and statutory consents have also now been completed.

The Nanadie Well Project is situated in the Murchison District of Western Australia within mining lease M51/1040. The project lies approximately 650km northeast of Perth and around 75 km south-east of Meekatharra. 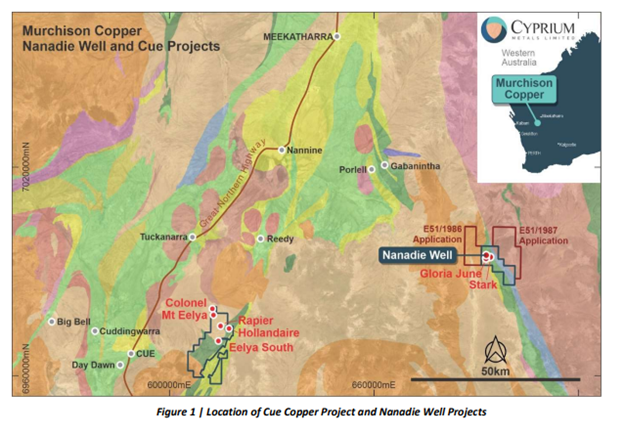 Horizon Minerals estimated a 2004 JORC compliant mineral resource of 151.5kt contained copper and 74.2koz contain gold was hosted by the project. Cyrium Metals plans to include the Nanadie Well Copper project in its ongoing scoping study of Cue Copper Project.

The proceeds from the divestment would aid the Company to accelerate its exploration and advance long-term mine and mill development studies.

[All currency is in AUD unless stated otherwise]