Horizon Minerals’ (ASX: HRZ) Potential to grow production and mine life at Boorara Shine with the Acquisition of Kalpini Project

Kalpini Gold project is in Western Australia, 50km north-east of the Company’s 100% owned Boorara gold project. The acquisition is in line with HRZ’s strategy of further regional consolidation of advanced development assets in proximity of the proposed Boorara Mill.

Horizon plans on including Kalpini as core projects under evaluation along with Boorara, Rose Hill, Binduli and Teal as part of the consolidated Feasibility Study due for completion in June 2021. 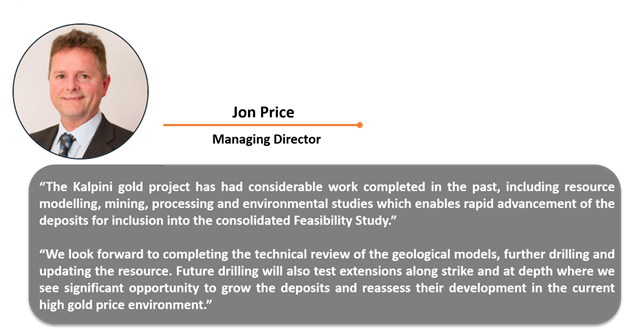 With this backdrop, let us explore the details of transaction as well as Kalpini Gold Project bolstering the Company’s strategic objective to become stand-alone mid-tier gold producer.

Lens through the Transaction

Horizon Minerals executed a binding Tenement Sale Agreement with to acquire the mining lease and miscellaneous Licence for a total cash consideration of $2.75 million, which would be payable at settlement.

The settlement is subject to the meeting following conditions precedent:

Settlement of the transaction is anticipated in the December Quarter 2020.

Kalpini is located in the Eastern Goldfields of Western Australia, ~65kms north-east of Kalgoorlie. The project is connected to Horizon’s flagship Boorara project via existing roads. It covers an area of approximately 585 hectares, comprising of granted mining lease M27/485 and miscellaneous lease L27/88. Gambia, Atlas and Camelia are the main ore deposits within the project.

Kalpini tenements also includes open-cut pits (Gambia open pit), shafts, and trenches mine workings. The workings are located in the current Atlas prospect, originally mined as an underground operation (1898 and 1910) have also been referred to as the Man O’ War workings.

Over the years the Camelia Pit, which is in the Gambia North area, has been referred to as the Enigma Prospect, the Gambia Prospect, and the Camellia Prospect. The Camelia Pit and surrounding workings were mined in two stages, with a small open pit in the first stage (1902-1934) recording production of 5.84kg Au at an average grade of 6.0g/t.

Exploration work undertaken between 1970 to 2005 were focussed on identifying nickel mineralisation. Subsequently, several developments were further made under the ownership of KalNorth Gold Mines Ltd which later in 2017 divested the project to NBT Metals for $3.2 million. NBT Metals also carried forward drilling and gold production at the project.

Kalpini is stationed in the Kurnalpi domain of the greenstone belt called Norseman-Wiluna in the Yilgarn Craton. A series of north-northwest trending interconnected greenstones belts characterises the region. The belts have been intruded by granitoid batholiths.

The rock encountered in the Gambia is an Archean dolerite-gabbro unit. Maghemite and clay-rich alluvium are present in Gambia South between depths of 1m and 10m, generally deepening to the east and the south. No alluvium is present in Gambia North, where Laterites are goethitic and haematiitic and extend down to ~15m depth. Meanwhile, Saprolite extends down to the depth of ~35-40m.

Along with the Gambia-Camelia trend, gold mineralisation has been defined over a strike length of 900m and confined to several high-grade flat dipping lodes which are stacked narrow (0.5-3m) and hosted within gabbro.

The project area has undergone a significant amount of drilling with the latest diamond drilling completed by KalNorth in mid-2015 confirming the flat dipping high-grade nature of the lodes.

Horizon has planned a detailed review of all historic data and geological model while it would assess further drilling requirements for updating the historical resources to JORC 2012. The Company intends to conduct additional infill and validation drilling to improve the JORC classification.

The mineralisation at the project remains open along strike and at depth. Extensional drilling planned to test resource extensions.

The three deposits including the Gambia, Camelia and Atlas together host 255,600oz Au at 1.7g/t Au of a historic Mineral Resource (before depletion). All deposits are open along strike and at depth offering exploration upside to known mineralisation.

Meanwhile, Horizon undertook a detailed due diligence assessment, including the review of the following: