The drilling program targeted to test the extension of mineralisation at depth and identify any potential plunge to the mineralisation system. The au courant audience must know that Gimlet holds JORC resource of 69, 000 oz gold.

The diamond drilling core material was utilised for alteration and structural mapping to integrate to a new critical mineralisation study to develop new targets.

Both diamond drill holes (20GDD001 and 20GDD002) displayed a 30 metres thick envelope of alteration including mineralised shoots, with 20GDD001 displaying a broad zone of 33.3 metres with 1.6 g/t gold. Both the drill holes confirmed that the mineralisation continued with depth and illustrated the exploration potential. The mineralisation will be tested further in November including the WA Government co-funded 500-metre-deep diamond drilling under the Exploration Incentive Scheme (EIS). Additionally, an RC drilling will also commence during November and will contribute to identify and add potential new JORC resources.

In August, First Au commenced a diamond drilling program at the flagship Gimlet gold project. The drilling program included a 3 diamond holes (763 metres in total) to test the plunge extent beneath the known gold mineralisation and potential new parallel lode positions. The fourth planned drill hole was not drilled and will instead be drilled as an RC drillhole in the upcoming program.

The drilling program had prioritised the diamond core to have extensive alteration and structural mapping along with engaging with Model Earth, geological consulting company, to complete the task. A new critical mineralisation study intends to better understand the Gimlet prospect and develop new targets. Due to the COVID restrictions, some of the results have been delayed. 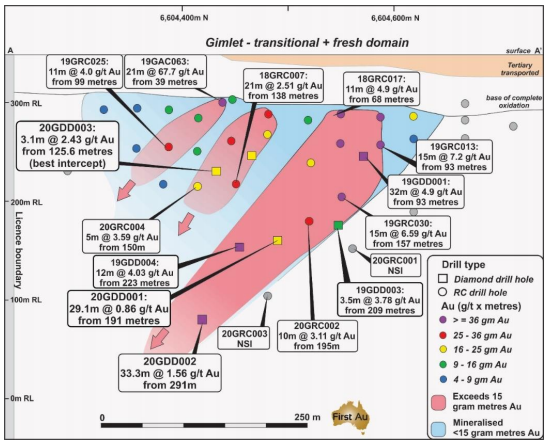 The drill holes intersect mineralisation which was observed in previous drilling programs. The assay results and geology indicate that the mineralisation is open at depth. The drilling intercept 20GDD002 displays the deepest intersection at a vertical depth of 291 metres.

The latest study suggested that Gimlet is a complex system which hosts preserved polyphase deformation. The drilling program targeted a southerly plunge while the study indicates that the mineralisation may shoot in other direction facilitating the potential of new drilling prospect to be followed at Gimlet.

Next Steps and Way Forward at Gimlet

The drilling campaign has been planned for November to test the new target areas, including the recently identified targets from the IP (Induced Polarisation) and the SAM (Sub Audio Magnetics) geophysical surveys. The program plans to also test new structural targets from the recent diamond drilling program. 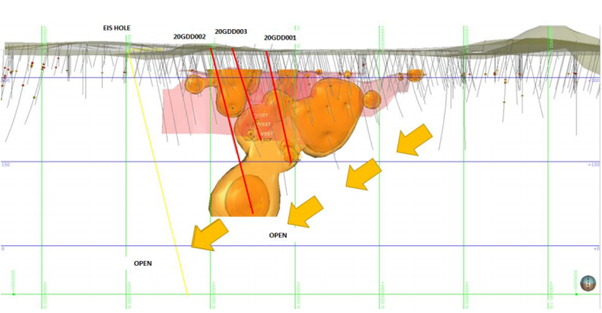 A successful gold intersection in the planned diamond drill hole substantiates the potential of a major gold camp at the Teal-Gimlet mineralised corridor in the Eastern Goldfields.