Seasoned gold explorer, First Au Limited (ASX:FAU) announced the renewal of exploration licence EL5505 which hosts the Snowstorm Gold Project in Gippsland, Victoria. The renewal was one of the requirement precedents to the FAU’s option over the Snowstorm project. Now, First Au has 2 years to explore the tenement package and decide on exercising the option. The explorer also holds a 12-month right to extend to the 3rd year of the option term.

Earlier on 9 July 2020, First Au had announced entering into an option agreement with Mines of Stirling Pty Ltd to acquire 85% stake (80% post dilution) in the granted exploration licence (EL5505) and the prospecting licence application (PL007319).

The Snowstorm project is situated 15 kilometres north of VicGold’s Haunted Stream Project and both share strong similarities. The Snowstorm project hosts the same Ordovician-aged rocks free gold and sulphide lodes, that are structurally controlled with walk up drill targets upon the completion of the mapping. Multiple mafic dykes have been observed and occur immediately adjacent to mineralised quartz reefs. 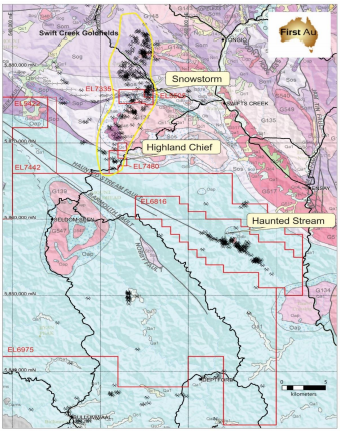 The main targets identified at the project include a series of fault hosted lodes which occur sub-parallel to bedding trending NW-SE. Additionally, First Au has identified an array of cross-structures with striking similarity to Haunted Stream prospect bolstering confidence in the potential to host auriferous deposits and reflects similar structural controls as the Haunted Stream project.

Similar to the Haunted Stream project, Snowstorm offers a near term potential with drill ready targets for the upcoming drill program. The work at Snowstorm is set to commence with the focus on identifying targets for the near-term drilling.

First Au’s transaction for Snowstorm project included a condition precedent of the transaction to renew the exploration licence (EL5505) for at least 3 years. Although the current renewal has been obtained for less than 3 years, First Au believes that the extension obtained by Stirling complies to the condition and marks the completion of the requirement.