According to the Minerals Counsel of Australia, Australia has about 16.3% of the globally known gold resource, which is the largest share of any country in the world. In terms of production, Australia is at No. 2 spot (behind China), producing 282 tonnes in the 2015-2016 season and has now become the world’s third-largest gold exporter.

Gold, considered a safe heaven, has surged massively after the onset of the COVID-19 pandemic. From the low of almost US$1,450 an ounce, gold had risen to a high of more than US$2,075 within one year, currently trading around US$1,800 per ounce. With such tail winds, companies operating in the precious metals sector have done well. One such ASX listed company that has successfully capitalised on Australia's booming gold industry is Red Dirt Metals Limited (ASX:RDT). 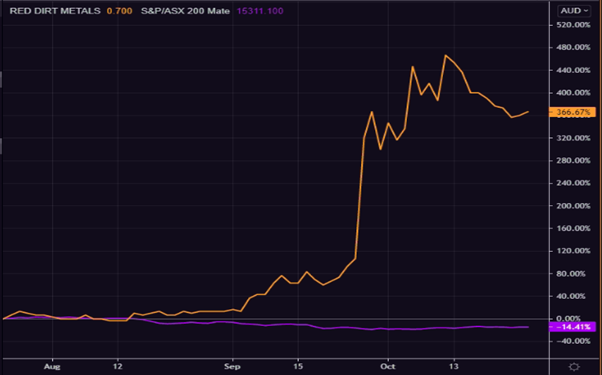 Image Description: A comparative chart of price return of RDT shares and the ASX 200 Materials index for the last three months

This is a massive outperformance when compared to the benchmark ASX 200 materials index (ASX:XMJ), which has delivered a three-month return of a negative 14.41%, while YTD return also stands at a negative 4.52%. Broader market index, the ASX 200, is up 13% this year.

Red Dirt is a budding Australian miner with a market capitalisation of AU$100.32 million, and it is primarily focused on the development and exploration of underexplored exploitation mines in Western Australia. At present, the company is working on 4 projects:

During the financial year ending 20 June 2021, the company successfully completed a placement to sophisticated investors, raising a total of AU$3.95 million by issuing shares at an average price of AU$0.13 per share.

Although the company recorded an operating loss after income tax from continuing operations of AU$703,744 in FY21, the loss was significantly reduced from the last year’s AU$1.56 million loss. The company was able to significantly reduce its finance cost from AU$2,320 in FY20 to AU$57 in FY21. This led to a massive improvement in earnings per share (eps) from negative AU$5.11 in FY20 to negative AU$1 in FY21.

However, the spotlight of these results was on the company’s almost-600% increase in total assets, which surged to AU$20.54 million from AU$4.19 million last year. On the contrary, total liabilities were up from AU$458,203 to AU$651,522 during the same period. Red Dirt Metals ended FY21 with a net cash balance of AU$1.61 million.

Non-executive Director Amanda Jane is the largest single owner of the company and holds about a 3.77% stake in Red Dirt Metals, amounting to AU$2.38 million. This is followed by non-executive chairman Alexander Robert Harry Hewlett holding roughly 3.72% interest or 5.4 million shares, valued at around AU$2.34 million. 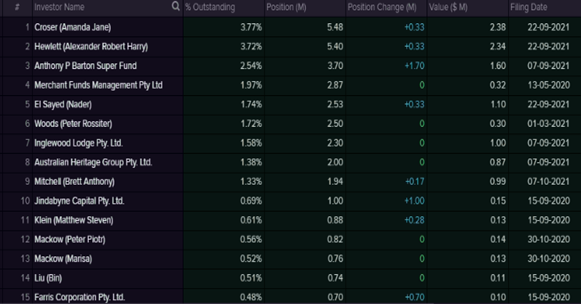 Anthony P Barton Super Fund, Merchanr Funds Management Pty Limited, have a 2.54% and 1.9% stake, respectively. A boutique investment banking firm, Australia Heritage Group Pty Limited, is also a shareholder of the company, holding 1.38% or 2 million shares. None of the top 15 shareholders of the company has reduced their stake in recent fillings.

Metal and mining companies are extremely cyclical in nature and sway to macro-economic events. Further, competition within the industry usually increases as the under lying commodity price increases since it incentivises not only new exploration activities but also old/abandoned ones. Investors should be extra cautious of the cycle while considering metal and mining shares.