By the end of this month, customers who have taken loan deferral in the wake of COVID-19 would decide on normalising the repayment or opting for other measures.

Lenders are now gearing up for the loan deferral issues as people opting for extension would need further contact with the bank to consider other available measures.

Recently, ASX banks rallied on the big announcement by the Federal Government on responsible lending norms. The Morrison Government will now take up a consultation and draft the required amendment to the existing laws for the reform process.

He told that removing ‘outdated-regulatory barriers’ will eventually add more firepower to the Australian economic recovery. Meanwhile, Federal Treasurer Josh Frydenberg stated that the plan is estimated to add $6.4 billion to the GDP by 2024.

Related: Dividend cuts from banks; Should you worry?

As September comes to an end, three of the four major banks are closing full-year. Just like Bank of Queensland has given a teaser regarding its FY20 results, the three banks would also follow the same route and disclose some information in the coming days.

Investors will be eager to absorb information on loan deferrals, loan impairment expenses, and any other significant items hurting the profitability of the banks. Perhaps the most important trigger point of investors would be information on dividends.

A collective provision of the expense of $133 million (pre-tax) is based on the updated economic data by the Reserve Bank of Australia (RBA), and the bank’s analysis of customers on a relief package.

Besides, BOQ expects to incur $11 million (pre-tax) in FY20, which stems from a pro-active assessment of historical pay and entitlements for employees.

BOQ highlighted that $175 million loan impairment expense constitutes ~37bps of gross loans. In 1HFY20, the bank incurred collective provision of $10 million with a further $123 million in the second half, taking the total to $133 million.

As a result, the CET1 ratio of the bank would be lower by 39 basis points that is well above the target range of 9% to 9.5% at the end of the year. This has been attributed to strong organic capital generation in the second half, offsetting the impact of capital erosion on the back of impairment charges. 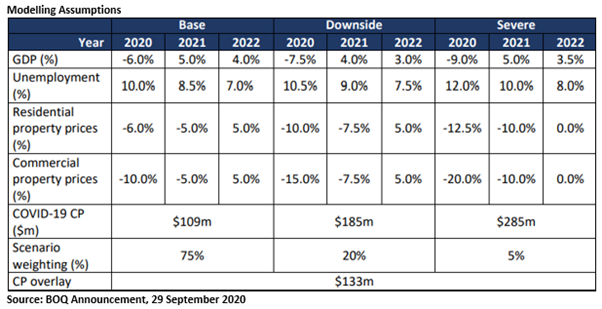 Since the first-half results, economic conditions have changed, and the increased provisions reflect updated economic forecast of RBA, coupled with industry and sector assumptions of the bank.

While forecasting impairment losses, BOQ incorporated higher unemployment, downgrades to property prices, and increased duration of the economic downturn. It has increased weights on the downside and severe case scenarios compared to the first half modelling.

Bank of Queensland remains committed to supporting customers during the challenging period through various measures. It is also ensuring that flow of credit to the economy to help small and medium enterprises come out of the distress.

At the end of August 2020, the bank has 12% housing customers taking banking relief and 16% of small and medium sized enterprise customers, both based on gross advanced loans. Of those customers accessing relief packages, one-fourth continue to make full or partial repayments.

Remuneration and superannuation issues are also coming out in Australia. Taking a proactive approach, Bank of Queensland has commenced a review of its wages and entitlements. An initial review by the bank has identified issues in superannuation and employees under an Enterprise Agreement (EA).

The bank has apologised to the employees affected by these issues and is ensuring employees are remediated, while it completes a broader external wage analysis and assessment for employees.

As a part of the Superannuation Guarantee Amnesty, it has made superannuation payments to the Australian Tax Office (ATO) amounting of $2.4 million. ATO and the bank will also contact former and current employees who would be due to receive these payments.

Bank of Queensland notified the Fair Works Ombudsman and the Financial Services Union, and external parties are engaged for the analysis and remediation process. Further review will determine the impact, while the expense of $11 million is incurred in FY20.

The bank has completed a scenario analysis and consulted to the Australian Prudential Regulation Authority. Further information on dividends would be provided at the time of the release of the full-year results.