Operating as a fintech and digital commerce software and services provider, the company facilitates millions of transactions on a monthly basis in Malaysia. Its platform IOU Pay enables large customer communities to extend their IT applications to any mobile device and integrate mobile technology via their existing business. 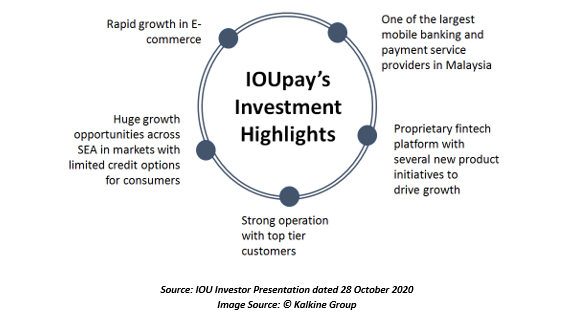 The company is operating in the growing SEA internet economy, which is anticipated to reach US$300 billion by 2025 (GMV), according to the investor report referring to Google & Temasek / Bain, e-Conomy SEA 2019, Bank Negara Malaysia 2020 Report. In 2019, the SEA internet economy was recorded at US$100 billion.

The SEA region is witnessing growing adoption of digital payments, which is expected to cross US$1 trillion by 2025 and contribute almost one in every two dollars that is expected to be spent in the region, the report highlighted. Usage of credit cards and ATMs is also experiencing a decline as e-money is gaining prominence and accounting for over 50% of all payment volumes.

There has been ~200% growth in e-commerce in the region since 2015. The boom is expected to triple in value by 2025, with large opportunities in Indonesia.

Growing internet dispersion in SEA along with the Government’s encouragement and support for cashless economies is generating a huge opportunity for specialist non-bank financial platforms to cater to credit-famished consumers.

In order to do so, the company plans to expand from transaction processing to incorporating additional value-added services including mobile banking transactions, bill payments, and digital commerce for leading brands and for their merchants.

The company already has the customers and the technical capability to scale up. 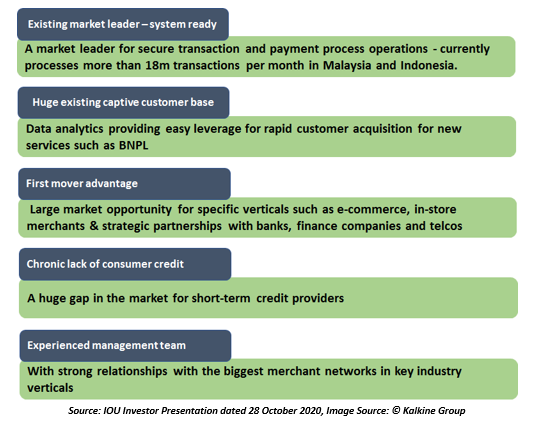 In Q2 2021, the company’s focus would be on the IOUpay Rewards Program Malaysia along with Compliance approvals for Indonesia BNPL partnerships. Platform focus includes Consumer App with cross-selling features & referral program.