On the back of significant progress on its lithium, zinc and gold projects, shares of ZNC have surged by over 18% in the last one month. Showcasing strong momentum, shares of the company offer a 52-week return of 225%.

The Auburn gold project in Queensland has been secured through ZNC’s wholly owned exploration licence as part of its ongoing project generation activities. ZNC’s Auburn, Red Mountain and Privateer gold projects are located within the prolific Auburn portion of the Connors-Auburn Arc, which is a part of the New England orogenic belt.

ZNC’s reconnaissance sampling program at the Auburn gold project has already confirmed the presence of high-grade gold mineralisation right at the surface. The sampling program collected as many as 49 rock samples with the assay results returning gold grades up to 23.3 g/t. As many as nine samples recorded a gold grade of more than 1 g/t.

An initial soil sampling program in the central section of the project has delineated multiple strong gold anomalies. Three of these anomalies are associated with and extend from the historical gold mines with a strike length of up to 600m. The soil samples yield gold grades up to 1.1g/t.

The gold mineralisation is interpreted to be hosted within sheared granitic rocks. The rock samples with grades exceeding 1g/t Au are all strongly altered with no or extremely rare quartz veining. The scarcity of quartz veins, host rock formations and alteration suggest the potential for an intrusion-related gold system (IRGS). 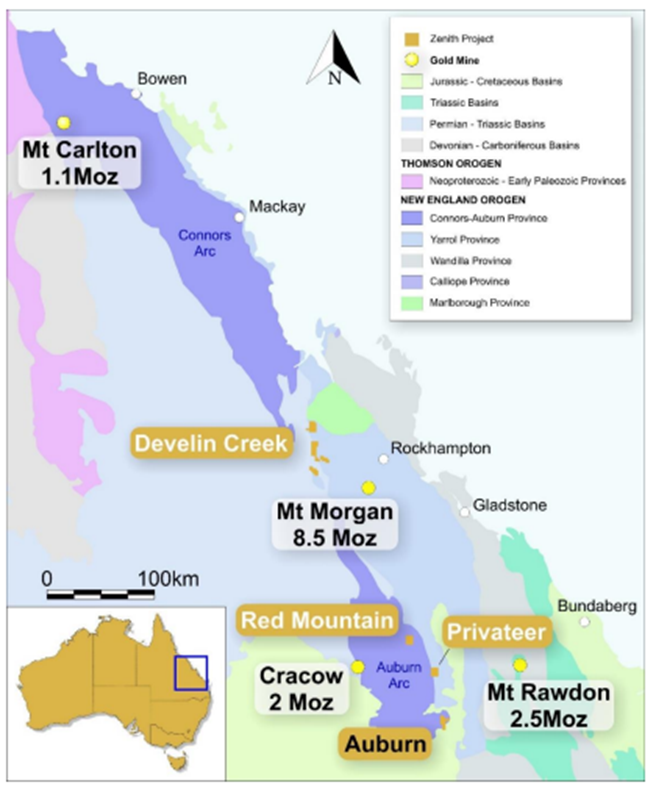 The government mining records have already confirmed the existence of historical mining operations from the 1880s to 1915. The project area also hosts old workings, which were mined on the small mining leases in 1970s and 1980s.

On the exploration front, Newmont, Kirk River and Compass Resources undertook reconnaissance sampling and mapping in areas around the old prospects between the 1980s and the 1990s. For the past 25 years, no field exploration activities have been reported at the project.

Recently, ZNC entered into a Lithium Joint Venture to focus on minerals containing lithium and related metals required for rechargeable lithium-ion batteries for electric vehicles and renewable energy storage. The aspiring lithium miner intends to demerge its non-Battery Minerals projects into one or more companies, which would be listed on the ASX. Any such demerger would be subject to the approval by ZNC’s tax advice favourable to ZNC, shareholders, the ASX, the ASIC and other regulatory approvals. ZNC’s shareholders will also benefit from an in-specie distribution of the newly listed entity on the ASX.